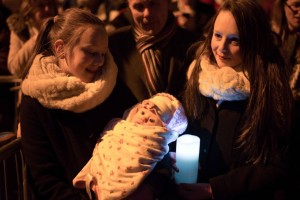 Early on in her gestation last May, doctors said that Grace Mc Breen would not survive.

Her parents were informed of the medical problem early in the pregnancy during a routine scan.

“We were told something wasn’t right and referred to a hospital in Dublin,” Martin Mc Breen told the ’33 to 1′ rally highlighting media bias on abortion last Wednesday night.

The parents went to the Dublin hospital the next day where they were given the devastating prognosis that there was no hope for their child.

The doctors were “surprised she had survived so long. She’s unlikely to make 20 weeks,” they told her parents Martin and Sinéad McBreen from Cavan.

“We were advised that we didn’t have to go through with it [the pregnancy]. They said ‘We have a sister hospital which could take care of this and we could get on with our lives,” Martin Mc Breen told the 1,500 participants at the rally.

“I think there was an expectation there – ‘this is the way people go’. It felt strange that there was this expectation. We didn’t ask for information to go down that road.”

Sinéad said she would continue with the pregnancy. They were advised to attend the hospital every week until the heart would stop, “because she just wouldn’t be able to survive”.

So week in, week out they went. “We thought it’d be great if we got to 26 weeks and she’d be stillborn rather than a miscarriage,” said Martin.

In the meantime they told their other children and went down to a cemetery and picked out a grave.

The weeks passed, and eventually on 12 November 2014, baby Grace was born, frail but healthy.

The doctors were stunned as they had told the Mc Breens the baby would die “sooner rather than later”.

“When she was born they said we can’t understand why she survived other than saying it was divine intervention.”

To great applause, a shot of a well-wrapped up baby Grace, appeared on the large screen at the rally as the baby was carried by her sisters towards the stage.

Mr Mc Breen said the way the pregnancy had been treated was “worrying” – the clear expectation being that his wife would travel to the ‘sister hospital’ for an abortion.

“[It would be] even more worrying if they had that facility within the hospital and there would be an even bigger expectation that this is the way people will go and I think that is a very worrying road to go down because  where there’s life there’s hope,” he said.