Professionalism and significance of IEC2012 recognised 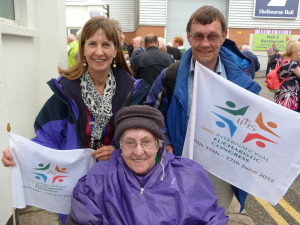 The Congress, which was attended by in excess of 100,000 pilgrims from 120 countries including Ireland, was awarded honours for Best Event Manager of the Year, which went to Anne Griffin, General Manager IEC2012.

It also scooped awards for Best Exhibition Organiser and Best Event Video of the Year, which was awarded for the televising of the opening ceremony by Kairos Productions.

IEC2012 also picked up an award for the Best In House Event Person of the Year, which went to Laura Phelan, IEC2012 Event Services & Logistics Manager and was short-listed in a number of other categories.

Over 55 staff, 2,000 volunteers, business partners and the tens of thousands of people from 120 countries were involved in the Congress which was held at the RDS and Croke Park from 10-17 June 2012.

“We are delighted that the Events Industry in Ireland has recognised the size, scale, professionalism and significance of the 50th International Eucharistic Congress,” Anne Griffin, General Manager of IEC2012, said at the awards ceremony.

Ms Griffin told CatholicIreland.net that the honours were “an endorsement” of the seven-day event, which was also attended by 200 journalists who showcased the country as a destination for both tourism and pilgrimage. 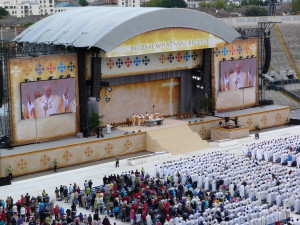 According to Ms Griffin, despite a smaller than hoped for turnout and poor weather conditions, IEC2012 still delivered under budget.

The operational budget had been set at €11.84 million, however the Congress was delivered at €9.35 million. All costs have already been paid and there is no deficit.

After the Congress was over organisers conducted an online survey with the assistance of the DIT School of Tourism and Hospitality of those businesses who serviced it.

Over 1,200 responses were received and from these IEC2012 organisers were able to calculate the revenue generated by the religious gathering.

“The Congress itself spent just under €10 million on all operational costs and the two-year pastoral preparation programme,” Anne Griffin said.

These costs included a two-year pastoral programme for all dioceses in Ireland; staffing and admin costs for three years; promotion in Ireland and abroad over two years; funding for the congress website in seven languages; venue and all services costs associated with an eight day event in RDS and the final event Croke Park; insurance, health and safety, licences, translation facilities, workshop operational costs, media facilities, volunteer training, uniforms and catering for over 1,700 people for setup and operational days.

A further €23 million was spent by pilgrims on accommodation, transport, food, taxis, transport, extended visits where pilgrims travelled around the country, gifts to bring home, and registration to attend the Congress.

According to Anne Griffin, IEC2012 had a solidarity fund which pilgrims attending could contribute too. The money collected was used to assist pilgrims from low wage economies attend the congress. After all approved requests were paid out, there was a balance and this has now been passed to the organisers of the next congress in Cebu in the Philippians which will be held in January 2016. 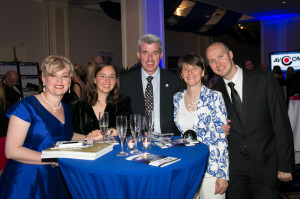 Speaking to CatholicIreland.net, Anne Griffin said IEC2012 had developed many aspects of the operations planning on previous congresses. These included the use of new technology such as the congress app, the congress website, social media, and digital equipment which allowed for new ways of delivering information and details.

“Best practice from the events industry was used and the event plans for the congress have been passed on to the organisers” in Cebu.

Referring to the success of the Congress workshops which saw over 250 national and international speakers address a wide range of subjects related to the Congress theme, Anne Griffin said they had “established the importance of offering people the opportunity to listen, discuss and explore many areas of Catholic life, faith and responsibilities.”

“For the many organisations, corporate companies and suppliers engaged by IEC2012 there was economic benefit but because of the congress – which for many was a first in terms of working with the Irish Church- there was an understanding of the role faith can have in people’s lives and how it can be incorporated in a positive way into how people work together”, she said.

She explained that the legacy of the Congress will live in on the diocesan congresses and faith gatherings of various kinds that will be held here over the coming years.

“There will be an national congress in 2015 and we also hope that there will be pilgrims from Ireland who will travel to Cebu in January 2016 for the International Congress there.”

Recalling her experience with IEC2012, Anne Griffin said that what surprised her was the numbers of volunteers who after very long shifts working hard in the service of others asked to be given extra duties on days they were not scheduled for.

“Their enjoyment and feeling that they were part of something so important meant that for many, who had that extra time, they offered it generously. We hope that the skills and experience these volunteers gained as a result of the congress encouraged them to become more involved in their local parishes and dioceses.”

“The International Eucharistic Congress’s are held every four years. Every host country has to make the congress they are hosting their own. It must reflect the culture and spirit of the people in that country, while also being an international gathering. The success of the 50th International Eucharistic Congress showed that despite the problems we were faced with it became a real opportunity to celebrate the positive, and allowed all to look forward to a better future,” Anne Griffin commented.

She added, hosting an International Eucharistic Congress allows the people from that country to review what it means to be a Eucharistic people in a local, national and international context.

“I always said it wasn’t to be a seven day wonder. It did bring a sense of vitality and of being together,” Archbishop Martin told CatholicIreland.net.  It also brought a realisation that the church has “a challenging task ahead” of it.