Home > Featured > Award for “Timeless advocate for the disadvantaged” 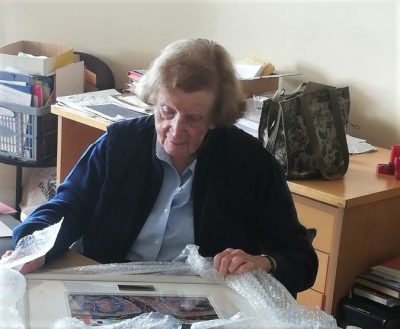 The Director of the Vincentian Partnership for Social Justice, Sr Bernadette MacMahon, has been awarded this year’s Dr Mary Redmond Award in recognition of her contribution to the community and voluntary sector.

A member of the Daughters of Charity, Sr Bernadette is also a trustee and vice chairperson of St Francis Hospice in Dublin (Raheny and Blanchardstown).

Responding to the news, The Wheel tweeted, “Sr Bernadette is an inspiration for many of us here at The Wheel.” Another tweet from Eamon Timmins of Concern stated, “Richly deserved. A timeless advocate for the disadvantaged and those on low incomes.”

The Director of the Vincentian Partnership for Social Justice (VPSJ) has contributed to books and reports examining social and economic change in Ireland and highlighting poverty and social exclusion.

These include the 2018 report, ‘Stories of Struggle: Experiences of Living Below the minimum Essential Standard of Living’.

Speaking to the Irish Catholic at the time about the report’s findings, Sr Bernadette highlighted the impact of living with an inadequate income on family life.

“They haven’t enough money to make ends meet; they don’t have enough money to pay for food, clothing – all the basic necessities they have to cut back on every one of those, and cutting back that brings us anxiety, brings us concern and brings very real pressure and burdens on households,” she said.

The Vincentian Partnership for Social Justice was established in 1996 to work for social and economic change tackling poverty and social exclusion. It consists of the Society of St. Vincent de Paul, the Vincentian Congregation, the Daughters of Charity and the Sisters of the Holy Faith.

The Mary Redmond Honorary Award is named after Dr Mary Redmond, the late academic, lawyer and founder of The Wheel and the Irish Hospice Foundation.The award honours an individual or group who has contributed in an exceptional way to the advancement of the community and voluntary sector.

Dr Mary Redmond, a corporate lawyer, academic and founder of a number of charities, died in 2015 aged 64 after a long battle with cancer. She was widely regarded as possessing one of the finest minds of her generation, and began teaching law at University College Dublin (UCD) when she was just 19 years old.

Sr Bernadette MacMahon is a sister of the Columban missionary, Fr Hugh MacMahon, former CEO of the Irish Missionary Union.

Sr Bernadette and Fr Hugh’s sister, Sr Rosaleen MacMahon, who died in 2017, was principal of St Louise’s Comprehensive in West Belfast, which for a time was the largest girls’ school in Europe, with 2,400 students. She was awarded a CBE by Queen Elizabeth for her contribution to education, especially during the Troubles.