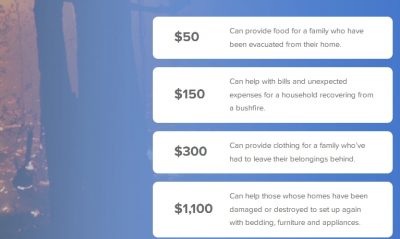 Details of how donations can help on the SVP Australia, ‘Vinnies’, website.

through Australia, the country’s government has announced that nearly a quarter of a million people will have to be evacuated to escape the inferno of a ‘megablaze’.

Already an area greater in size than the island of Ireland has been scorched by the bush fires, which have left thousands homeless with their livelihoods destroyed and, as of yesterday, twenty-seven people have been killed. On Wednesday, after the Angelus prayer in St Peter’s Square, Pope Francis called on all “to pray to the Lord to help the people of Australia at this difficult time”.

“There is no end in sight to the horror that confronts us with our powerlessness before the devastating force of nature,” said the Archbishop, who is President of the Australian Catholic Bishops Conference.

Describing the efforts of firefighters as “heroic” and the resilience of communities affected by the disaster as “extraordinary”, Archbishop Coleridge said: “This has been Australia at its best and we all stand with those who have been most stricken and with those who are putting their lives on the line to fight the fires. But we need more than words. Expressions of solidarity are important, but they are not enough.”

The response of the Catholic Church in Australia to the fires is to include a church plate collection to provide aid to all those affected. This will take place during the Australia Day weekend, the country’s national holiday, which occurs this year on Sunday 26 January. Funds will be administered by agencies including Catholic Health Australia, Catholic Social Services Australia, the National Catholic Education Commission and the Society of St Vincent de Paul – known in Australia as “Vinnies”.

“Vinnies is responding in all affected states and territories,” said the Archbishop. “Its network of local conferences and support services has seen them rapidly respond throughout the nation as the fire crisis has spread.”

Each year bush fires break out in Australia, but the magnitude of this year’s fires is unlike anything seen before. The blazes have been made worse by years of drought and exceptionally warm weather conditions, which may be the result of climate change. Such is the magnitude of the fires that they are creating their own weather systems, known as firestorms, with the clouds of smoke, dust and ash sparking thunderstorms that cause new, additional fires to break out in the parched countryside.

In addition to an emergency response, the Church recognises that it will be a long term process to help people, and whole towns, to recover and rebuild, Dr Coleridge noted.

Additionally, the Church is distributing the text of special prayers to be said in parishes, family homes and religious communities.

The Archbishop of Brisbane said: “Facing this exceptional crisis, we renew our call for insistent prayer for those stricken by drought and fire, for those who have lost their lives in the fires and their families, for rain to quench the parched land and extinguish the fires, and for urgent action to care for our common home in order to prevent such calamities in the future.

“A genuinely Catholic response to a crisis of this magnitude must draw strength from prayer which inspires concrete and compassionate action.”