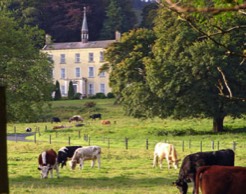 The Augustinians are to sell Orlagh retreat centre in Rathfarnham with an asking price of €2.5 million.

They no longer have the financial resources or personnel to sustain the Georgian building on almost 100 acres which has been in their possession for almost 150 years.

It has cost the province €500,000 over the past three years to keep Orlagh open.

“The provincial does not regret this, but this level of funding cannot be continued as income declines,” he said.

The premises and parklands at Old Court Road in Rathfarnham, Dublin 16, were acquired by the Augustinian order in 1872 for use as a novitiate.

Since 1997, it was a retreat and conference centre run by both lay staff and religious.

Fr John Byrne, Director of Orlagh, told CatholicIreland.net that he accepts the logic in the decision but he feels that they are losing something that cannot be replaced.

“There is a rich mix of ministry, liturgy, inclusiveness, hospitality and location with a strong emphasis on critical reading of scripture,” he explained.

The refreshing “Orlagh experience” is unlikely to survive, but he feels that some aspects of the ministry will continue into the future.

For example, Fr Kieran O’Mahony’s biblical expertise and experience will continue wherever he goes as will that of other members of staff.

“Orlagh has been a team ministry of Augustinians and lay people for 19 years and I believe that the team can look back and say that we have been true to our mission: ‘to being together people’s experience of life with a deeper understanding of the gospels to renew them for the time in which we live’,” he concluded.

A survey among those who have used Orlagh listed its benefits such as the sense of community, welcome, validation, hospitality, friendship, and kindness.

Someone described it as a “place where Christian values are promoted and the best of human values respected.”

Another said that they had an experience of liturgy that is “communal, participatory and inclusive”.

Someone else felt that they arrived at a sense of “peace and contentment” about a cancer diagnosis which they would not have reached had they not been introduced to Orlagh.

Members of the congregation that attend the Sunday Mass celebrated in a Lectio Divina style are determined continue, and hope to have found a new home before the house is vacated later in the year.