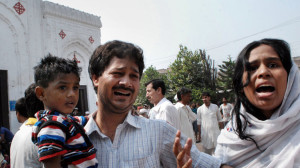 Deadly suicide attacks which claimed over 78 lives at a church in Pakistan were condemned on Sunday by Pope Francis as “hatred and war.”

Speaking on a one-day visit to the Italian island of Sardinia, the Pope told the crowds who had come to greet him, “Today, in Pakistan, because of a bad choice of hatred and war, more than 70 people are dead. This path is not the right one, it leads nowhere.”

Before praying for the victims of the deadly attacks, the Pontiff told the pilgrims in the city of Cagliari, “Only the path of peace can build a better world.”

Explosions struck the 130-year-old All Saints Church in the city of Peshawar as hundreds of parishioners, many of them women and children, were leaving after Mass.

The death toll of 78 included 34 women and seven children, while over 100 more were injured in the twin suicide bomb attacks.

The Taliban-linked group TTP Jundullah has claimed responsibility for the attacks.

Three days of mourning were announced in Pakistan while many politicians and religious leaders condemned the attacks.

Pakistan’s prime minister, Nawaz Sharif, said in a statement, “Terrorists have no religion and targeting innocent people is against the teachings of Islam and all religions. Cruel acts of terrorism reflect the brutality and inhumane mindset of the terrorists.”

Christians make up just under four percent of Pakistan’s population of 180 million people. They tend to be among the poorest sections of society, and sporadically suffer bouts of mob violence and church burnings usually linked to accusations of anti-Islam blasphemy.

The attack is likely to be seen as another sign of the growing threat from Pakistan’s militant groups, some of which are influenced by al-Qaeda’s ideology.