Five-hundred-and-forty students currently avail of food donations distributed by the chaplain of Athlone Institute of Technology and his team. Fr Shay Casey told Catholicireland.net that out of a total of 6,000 students, several hundred cannot afford food. 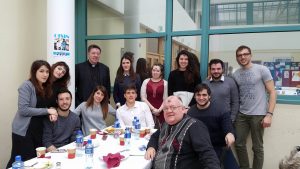 “We knew there were a lot of students in dire straits,” he told Catholicireland.net. Those who receive the food have been identified as being “on the margins”.

“It’s not difficult to see how this can happen,” he said. The student grant of just over €350 per month can be all used up on rent, leaving nothing for food. Any young person coming from direct provision has no means of supporting themselves apart from the standard €19+ per week.

Part-time jobs are scarce, and if a student does work weekends or nights their studies can suffer. Many families are not in a position to help.

“If the family is on social welfare, they  have very little disposable income and they might have another child in college as well. Some students would come in and say ‘Daddy told us at the weekend that our house is going to be repossessed.’ And they might have to leave college,” he said. 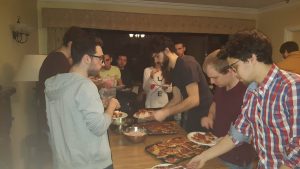 “You will get students who cannot pay the rent and become homeless. We try to take them in. We have a couch in our house which they can use until they get sorted. There is poverty [among students],” he said, explaining that poverty is when simple needs like a roof over one’s head, clothes and food are beyond reach.

Fr Casey and the chaplaincy team collect surplus food from Tesco and bring it to the campus for hungry students. Fr Casey has managed this feat of feeding the 500 with the help of the FoodCloud initiative, which ensures that products that are fit for consumption and would otherwise be dumped go to charitable organisations instead.

He says the food helps students to remain in third level education and to retain future prospects, as well as helping our ailing planet by ensuring that the food is not dumped in landfill.

“Our friends in Atheist Ireland often ask why we have a chaplaincy, but it has very little to do with anybody’s particular faith or belief, in the sense of feed them first and then talk afterwards. I believe very strongly that this is the work of the gospel,” he said.

When he worked in Africa with the Kiltegan Fathers for a number of years, it was always their mission to feed and educate people. The latter was vital, as learning a skill empowered people to support themselves. Similarly with students in Athlone, it is important to enable them to continue their studies.

“Education is the key. Some of these people are very bright and the tragedy will be that if they drop out of college, what will they do? They go back to go on the dole to be a liability wherever they are,” said Fr Casey. 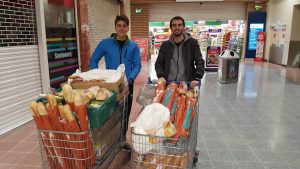 Fr Casey has been at the chaplaincy for the last 32 years. It is unique in that he lives with students. Most are international and rotate every year. They work together as a team to build a sense of community in the college.

At the moment, the Muslim students need support because the terrorism carried out by Islamic State makes it difficult for them. Fr Casey likens their situation to that of the Irish in England in the ’70s when the IRA bombing campaign was going on.