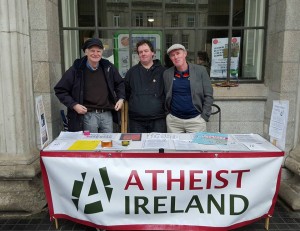 Figures showing that very few students attend Mass on college campuses around the country are not an accurate representation of the work that chaplains do nor a justification to drop college chaplains, according to one senior university chaplain.

Fr Leon Ó Giolláin SJ, who is head chaplain at University College Dublin (UCD), told CatholicIreland.net that Atheist Ireland used the figures obtained under Freedom of Information in “an incredible attack on chaplains based on that one factor”.

He added, “It is very naive and unjust.”

“We would expect those figures to be small and they don’t take into account the number of staff who attend Mass.”

Fr Ó Giolláin explained that he reports to his line manager at UCD and said “He is very clear that the chaplaincy has a unique and particular role.”

The Jesuit added, “We keep records of our events, for example tomorrow we are having an ecumenical service and 40 will attend.”

The chaplaincy works evenings after office hours which cannot adequately be measured. “Also there can be a lot of casual but important meetings with students. There is quality as well as quantity, the time you spend with individuals is very important.”

Work by UCD chaplains have affected the lives of thousands of students. For example, the now national suicide prevention campaign “Please Talk” which is supported by HSE was an initiative of the chaplaincy.

In recent weeks memorial and anniversary services for students and staff who have died have been attended by hundreds of students and Fr Ó Giolláin has been asked to officiate at several marriages.

The UCD chaplaincy played a very prominent role in relation to the Berkeley tragedy where several Irish students were killed when a balcony collapsed in America.

UCD chaplaincy offered a huge pastoral outreach and the memorial service in the college chapel was attended by more than 500 along with President Michael D Higgins and his wife Sabina. It was broadcast on the internet to a global audience.

Inter faith meetings are held regularly in UCD and Fr Ó Giolláin feels it is vital to give witness to good relations between faiths in the current climate of terrorist attacks.

Muslims are welcome at the chaplaincy on campus and information is given about the mosque which is situated near UCD.

The chaplaincy building itself is used by many groups and societies in the university ranging from the Japanese society to the Newman society. A chaplain lives on campus and so is available 24/7.

The article in the Irish Times claimed that in Cork Institute of Technology, there are about 12,000 students and an average attendance at the religious services on a week day on campus is four.

At Sligo IT, which has 6,000 students, the average weekday Mass attendance is nine.

The information was obtained from colleges under the Freedom of Information Act by Atheist Ireland, as a report ordered by outgoing Minister for Education Jan O’Sullivan, and undertaken by the Higher Education Authority, nears publication.

Atheist Ireland told CatholicIreland.net that the numbers attending Mass was the statistic that colleges provided as a measure of chaplaincy activity and that chaplaincies do not record the nature and number of individual sessions like counsellors do.

The atheist body is against chaplaincies in colleges as it believes students can freely attend nearby churches; in contrast a prison chaplaincy provides a service not readily available to prisoners.

“(In colleges) counselling can be provided by trained counsellors,” John Hamil of the national committee of Atheist Ireland and Atheist Alliance International told CatholicIreland.net.

He also took issue with how appointments to chaplaincies in colleges (worth €1.5million annually) are made, and stated that they should be open to any suitably qualified candidate man or woman, lay or religious  of any faith or none.

“Colleges need to first justify the appointments they are going to make. There are several colleges in the country who do not have chaplains, and they have not suffered any difficulty as a result,” he said.

“They should make the appointment through the public appointments service.” He said that Atheist Ireland would continue its campaign against chaplaincies in colleges and would raise the issue with the Department of Education and Skills and also with the Joint Oireachtas Committee on Education and Social Protection.

An Irish Times online poll on Monday (11th April) asked readers: “Should Irish colleges continue to employ chaplains?” Of the 2,247 responders, 65% voted “yes” and 35% voted “no”.