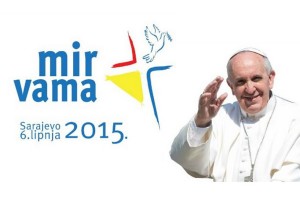 Pope Francis has called on men and women to become “artisans of peace” in living out their daily lives.

During his homily as he celebrated Mass at Sarajevo’s Kosevo Stadium in the presence of over 65,000 people, the Pope’s cry for peace echoed forcefully: “war never again!”

In a city which has known the abyss of pain and suffering inflicted by war, the Pope turned his thoughts to the many armed conflicts presently affecting our world and said these conflicts were “a kind of third world war being fought piecemeal”.

He added that in the context of global communications “we sense an atmosphere of war”.

Reflecting on the fact that “Peace is God’s dream, his plan for humanity, for history, for all creation”, the Pope said there are people who wish to incite and foment this atmosphere of war deliberately.

These were “those who want conflict between different cultures and societies, and those who speculate on wars for the purpose of selling arms”.

But war, the Pontiff warned “means children, women and the elderly in refugee camps; it means forced displacement of peoples; it means destroyed houses, streets and factories; it means, above all, countless shattered lives”.

To the people of Sarajevo he said, “You know this well, having experienced it here, how much suffering, how much destruction, how much pain!”

Appealing to all men and women of goodwill to be peacemakers and to carry forward their work “each day, step by step, without ever growing tired”, Pope Francis said that peace must be put into practice with acts of kindness, fraternity, dialogue and mercy.

This must be done, he said, with compassion, kindness, lowliness, meekness patience and a spirit of forgiveness.

The Pope said these attitudes are necessary to become artisans of peace precisely where we live out our daily lives.

Separately, Pope Francis described interreligious dialogue as “an indispensable condition for peace” and “a duty for all believers”.

Meeting leaders of the Muslim, Orthodox, Catholic and Jewish communities gathered in a Franciscan youth centre in Sarajevo on Saturday afternoon, the Pope praised the work of the local Council for Interreligious Dialogue, set up in 1997 to promote reconciliation, to coordinate common initiatives and to develop relations with Bosnia’s State Authorities.

Noting that the city of Sarajevo stands at a crossroads of cultures and peoples, the Pope said such diversity constitutes, on the one hand, a great resource which has contributed to the social, cultural and spiritual development of the region.

On the other hand, he said, it has also been the cause of painful rifts and bloody wars, most recently the conflict which devastated the country in the early 1990s.

Interreligious dialogue, he said, should not be limited merely to leaders of religious communities, but must also extend as far as possible to all believers, since it is above all “a conversation about human existence”.

Through dialogue, he told the religious leaders present, a spirit of fraternity is developed, which unites and favours the promotion of moral values, justice, freedom and peace. But in order for dialogue to be authentic and effective, he stressed, it must be based on a solid sense of identity, without which it can be ineffective or even harmful.

Praising his hosts for all their efforts to promote peace in the country, Pope Francis urged them not to be discouraged by the ongling difficulties, but rather to continue with perseverance along the path of forgiveness and reconciliation.

Concluding with a prayer for peace in Bosnia-Herzegovina, the Pope said may the city of Sarajevo, in the past a symbol of war and destruction, become again a sign of unity, where diversity does not represent a threat but rather a resource and an opportunity to grow together in peace and harmony.

In a meeting with religious, Pope Francis departed from his prepared remarks to speak off-the-cuff to his audience, following the testimonies of two priests and a woman religious.

Alluding to Bosnia and Herzegovina’s struggle to recover from a devastating three year war in the 1990s, Pope Francis said he thinks of “the sufferings and trials both past and present” in Christian communities there.

“Although you have lived through these circumstances,” he told the religious, “you did not halt; you endured, and worked hard to confront personal, social and pastoral challenges with a tireless spirit of service.”

For Fransiscan Brother Jozo Puškarić, those pastoral challenges took a dramatic turn in 1992, when armed Serb policemen carted him off from his parish home to a concentration camp where he suffered terrific beatings and hunger in “inhuman” conditions.

In words of greeting to the Pope, he said there were times when he wanted to kill himself and without the help of God and from others like a Muslim woman who gave him food, he never would have survived. He said he has never given in to hatred and has pardoned his captors.

In another emotional testimony, Sr Ljubica Šekerija of the Sisters of Divine Charity told Pope Francis that her order was running a home for elderly and disabled people in central Bosnia when the war broke out.

In 1993, armed foreigners from Arab countries, she recounted, kidnapped her along with an ailing local priest and three lay Caritas aid workers.

Many of the town’s non-Christians, she added, came out to ridicule them and applaud the militants as they were hoisted onto a truck.

She recalled being beaten and threatened, gun to her head, to convert to Islam. When one militant held a sword to her, demanding the priest crush her rosary beads with his feet, she pleaded with him to not give in to their captors’ demands to desecrate a sacred object. She preferred death.

Finally, thanking Pope Francis for his encouragement of their vocations, she recalled the many other religious who suffered so greatly during the war.

The Pope acknowledged the small minority of Catholics who today account for 15% of the 4 million-strong population of Bosnia and Herzegovina, saying he could imagine how, “coupled with the failures that sometimes occur in ministry,” the religious could at times feel like Jesus’ disciples who, after toiling all night long, “caught no fish.”

Muslims represent the majority of the population in addition to a large Serbian Orthodox community.

As an antidote to discouragement, the Pope entreated them to “abandon” themselves to trust in God order to “serve the Lord with joy, sowing hope everywhere.”