Armagh initiates discussions ahead of Synod 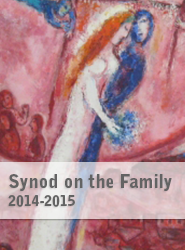 Meetings are to take place all over the archdiocese of Armagh following Archbishop Eamon Martin’s initiation of a period of reflection and discernment ahead of the synod on the family in October.

Groups around Armagh will reflect on the Relatio Synodi and Lineamenta which were produced by the Extraordinary Synod in 2014 and which are aimed at generating an in-depth examination of the Synod’s work.

These documents call for a rethinking “with renewed freshness and enthusiasm”, on what the revelation, transmitted in the Church’s faith, tells us about “the beauty, role and dignity of the family”.

Patrick Logue of the Office of Pastoral Renewal and Family Ministry (OPRFM), which is co-ordinating this initiative, said the Extraordinary Synod was about Marriage and the Family “in the context of evangelisation”.

As such it was not a discussion on doctrinal matters around marriage, but the real pastoral challenges people encounter in their local church every week.

In some countries polygamy might be an issue, whereas in Ireland and Northern Ireland there are two jurisdictions and some issues on marriage and the family relate to civil legislation.

“There are many issues which need to be teased out, reflected upon, and debated,” he told CatholicIreland.net.

“It is important for the entire Church to be aware of what is being debated in October’s Ordinary Synod, and to offer suggestions and comments which are relevant to the local conditions.”

Armagh has 61 parishes, grouped into 17 pastoral areas of three to five parishes apiece.

In February, the team from the OPRFM will facilitate public gatherings in each of the 17 pastoral areas, where members of parish pastoral councils and other interested parties will be invited to offer responses to the many challenging questions posed in the Lineamenta.

The OPRFM is co-ordinating the initiative, but Patrick Logue stated that it is being led by the diocese, which is both ordained and non-ordained in nature.

“Some of these reflection evenings will be facilitated by clergy and some by laity. The returns will be studied and collated by a small team with both clerical and lay members,” he said.

The responses will feed into this year’s General Synod on the Vocation and Mission of the Family in the Church and Contemporary World.

Patrick Logue is confident that responses will be welcomed and heard and used to inform the Synod.

“The facts are that Pope Francis has asked that the Relatio be published in full. He has instructed that the result of the votes on each paragraph be published (a Vatican first, available on the Vatican website).”

“He has asked that the Relatio, with some specific questions added, be the Lineamenta to inform the preparatory work for the General Synod. What a grave detraction it would be if we did not respond.”

He added that ultimately the synod of bishops will adopt a final text after the synod and that is the role of the episcopate.

“However, it does not mean that the bishops should attend without first consulting widely and reflecting on the issues with as wide a section of the local church as possible,” said Patrick Logue.

He concluded that in offering the public gatherings across the diocese, OPRFM is responding to what Pope Francis is calling each diocese to do: “- to use the period as a time of spiritual discernment and reflection on the pastoral challenges facing married couples and families today.”

Responses from the diocese will be collated and sent to the Irish Episcopal Conference, which in turn will send responses to Rome to be available to those working on the agenda and Synod documents in May.

Other groups and Diocese are also working on responses. We Are Church (Ireland) is holding a meeting during February, and Meath Diocese has called for responses with details of the documents on its website.