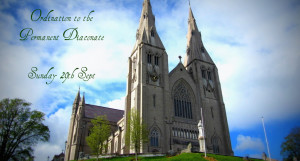 The ordination of the first five men to ever become permanent deacons in the ancient see of St Patrick was described on Sunday as an historic milestone in the history of the Archdiocese of Armagh.

Welcoming the five men into ministry, all of whom are married with children, the Primate of All Ireland, Cardinal Sean Brady, described it as an occasion of “great joy” for Armagh.

Speaking to CatholicIreland.net, the Cardinal said that though the permanent diaconate was restored in Vatican II it was “just now taking off in Ireland.”

“It is a day of great jubilation here for us all over the diocese.” He said there was “another batch” preparing for ordination to the permanent diaconate next year. “It is going well,” he remarked.

Reflecting on the joy of the men’s spouses, children, parents and friends, the Primate said “Their joy shows how much they appreciate this ministry which is being conferred – and that invites all of us to reflect on the ministry each one of us have from our baptism to share in the work of Jesus Christ – it is not just the ordained ministry,” he commented.

He added that the Spirit continues to “raise up people to minister to other people if we are attentive enough to the inspirations of the Spirit. The Lord will not leave his people untended.”

He told them that as married fathers and grandfathers “you will continue as ordained men to make a living in the world.”

Archbishop Martin said they were in a “unique position” as they would have “a particular point of contact with the lay faithful in your workplaces and in the community.”

One deacon, 46-year-old John Taaffe from Drogheda, has three children ranging in age from 21 to 9 and he is also a grandfather of one-year-old Jordan.

He explained how he had re-found his faith in 1999 after being a non-practicing catholic for years.

He went to collect someone from a prayer meetings and “experienced the love of God for the first time. The Holy Spirit touched my life. I felt the love of God and cried for a few hours and that started my conversion back to my faith.”

He currently works as the National Coordinator of the Irish Bishops’ Drug Initiative. He decided to become an addiction counsellor after his conversion and he sold his sales and marketing business to pursue this dream.

He will be serving part time in Ardee which is will link in with a centre ijn the town which he founded which supports families and those affected by addictions through prayer and counselling.

“For so many people the hope is not there. To be there in a supportive, caring and loving way is what I hope – to be a witness to the presence of God. Being a deacon is about serving. I hope I can serve by bringing people back to the sacraments.”

His wife Joan was very supportive. She said she wouldn’t like it if it was to take away from the priesthood. In that first year of discerning she got the answers to that – it is not. It is a stand alone ministry in its own right. “If anything it brings enrichment to the church from family men.”

From now on the deacons will be referred to as ‘Rev Mr’ and they will serve on a part-time basis in their appointed parishes, assisting with baptisms and funerals at the weekends and some administrative duties during the week.  Deacons cannot celebrate Mass or hear confessions.  All five men had to obtain the permission of their wives to go ahead with their studies for ministry.

The first ever permanent deacons, who are either lay single or married men, to be ordained by the Irish church began ministry in the archdiocese of Dublin in 2011.

Martin Barlow (45) from the Parish of Drumcree in Portadown is married to Ursula, and has two sons, Shea who starts university next week and Oisin who is in secondary school.

Although he was drawn to the priesthood when he was at school, he opted to go to art college and trained as a graphic designer. Marriage followed. Then in 2006, he experienced “a renewal of faith”.

“I made a promise to God that I would no longer be a Sunday Catholic but I didn’t realise that it would lead to ministry seven years later,” he said.

On the eve of his ordination, his aunt told him that his grandmother, who died when he was five, had always prayed that he would become a priest. “The influences were there within the family,” he said and praised his uncle Pat who is a Salesian priest.

“I am not here for the title or the clerical garments. I just want to be with others and lead them to Christ. I drank from the well of forgiveness – the well of Christ and I want others to take them to that.”

The five deacons, who include care worker Benignus Ndubuisi from Dundalk, begin their ministry after four years of study.