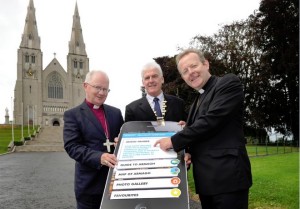 A new app providing a comprehensive guide to Armagh’s Catholic and Church of Ireland cathedrals has just been launched by representatives of the two churches.

Armagh’s Catholic and Protestant cathedrals stand on two opposite high points of the city but they come together in this single app as Armagh’s religious leaders join forces to promote religious tourism.

The app is designed to encourage visitors of all ages to explore the two magnificent cathedrals of Armagh, guiding them through the spiritual, cultural and historic heritage.

Representatives from the two Churches – Church of Ireland Archbishop of Armagh, the Most Reverend Dr Richard Clarke and Catholic Coadjutor, Archbishop Eamon Martin – came together to launch the joint digital service.

The launch is seen as an historic moment as it demonstrates the two cathedrals’ commitment to the latest digital technology and to connecting with visitors.

Speaking at the launch, Archbishop Eamon Martin said, “The Church is very open to new technology and understands the importance of embracing it as part of its future. This app will provide visitors with a wealth of information, interesting facts and history and I’m confident that it will encourage even more people to visit both historic sites and enable them to engage with us.”

Anglican Primate, Archbishop Richard Clarke described it as “A great opportunity to make this cathedral city much more appealing to audiences of every age.”

He added, “I’m thrilled that Armagh’s cathedrals are the first in Ireland to have introduced this type of technology to improve our visitor experience. I’m looking forward to seeing the app in everyday use and I hope that many more people will enjoy their experience because of it.”

According to Councillor Gerald Mallon, Chairman of East Border Region, thousands of visitors arrive in Armagh every year specifically to visit the two cathedrals, so the new app will make their visits even more informative. He hopes the new mobile resource will help attract an even wider audience.

Visitors can explore over 1,500 years of history in the ecclesiastical capital of Ireland. The app offers an in-depth guided tour of both St Patrick’s Church of Ireland Cathedral and St Patrick’s Catholic Cathedral and is designed to help visitors enjoy their history, architecture and spiritual life.

One notable piece of history which the app provides information on is the supposed burial of the bones of Brian Boru, the King of Ireland who defeated the Vikings in 1014, in the North Wall of St Patrick’s Church of Ireland Cathedral.

He lost his life in the battle and his body was brought to Armagh, where it lay in state in the cathedral for twelve days before burial. 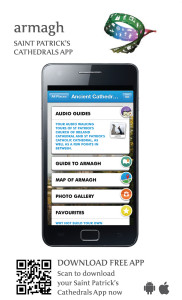 St Patrick founded his first stone Church in Ireland on the site now occupied by St Patrick’s Church of Ireland Cathedral, known as Sally Hill, in the year 445.

But the hill where the twin-spired Catholic cathedral now stands also has associations with the Saint.

The Book of Armagh tells a tale which is also depicted in the lower portion of the Cathedral’s great east window.

When St Patrick took possession of Sally Hill, a deer with her fawn allegedly leaped from the bushes. His companions wanted to catch and kill the fawn but the Saint would not allow them.

He himself took the animal on his shoulders and carried it, followed by its mother, to the site of the present Catholic Cathedral. The incident has been seen as a prophetic reference by Patrick to the building of another Cathedral in his honour 1,400 years later.

The app project which tells such stories is part of the East Border Region’s Tourism Development Programme with more than £2.7 million of INTERREG IVA Funding to enhance tourism across the entire East Border Region and encourage an increase in cross-border tourism activity.

The app is available to download free on both Android and Apple. For more information visit www.armagh.co.uk contact Armagh Tourist Information Centre.