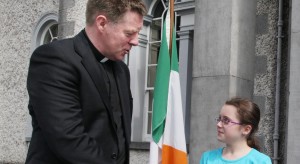 Bishop Francis Duffy has called for submissions on the issues facing the Church in the Diocese of Ardagh & Clonmacnois as part of its preparations for a diocesan Assembly in May 2020.

The consultation ahead of the diocesan assembly will offer people in the diocese an opportunity to highlight the issues they feel are most important for the church in the future.

The Bishop has asked people of all ages and of all experiences of faith to engage in the process and to pray for the initiative.

“For the listening process to be robust I am now inviting views from parishioners from across the diocese in order to determine what are the most important issues facing the Church in the coming years, and how should we best respond,” Bishop Duffy said.

He said he was asking interested individuals and groups, whether part of the Church or not, to get involved in the process and make submissions.

“I need to hear people’s opinions as to which issues should be a prioritised for the diocesan assembly, and why.”

These views will inform the preparations for the diocesan assembly which is due to take place in Longford over two days from 9-10 May 2020.

250 delegates made up of lay people, religious and clergy from across the diocese will gather to agree a direction for the diocese for the coming years.

Admitting he did not “underestimate the challenges involved” in the preparation and holding of the assembly, Dr Duffy said he was “nonetheless, looking forward to the process which is already producing energy and positivity from people and priests alike.”

In September, at a meeting with delegates from across the diocese, Bishop Duffy launched a listening process in St Mel’s College, Longford.

Following the meeting he initiated a consultation process to elicit views of people in parishes concerning the future of the local Church.

Since the September meeting, delegates have been engaging in a listening and consultation process in their local areas to identify the priority issues for consideration by the diocesan assembly.

The results from the local areas will be summarised and presented at the next delegate meeting in November.

At that point issues will be identified for discussion at the assembly next May.

55 priests are in active ministry in the Diocese of Ardagh & Clonmacnois which has a Catholic population of about 70,000 people.

The diocese takes in nearly all of Co Longford, the greater part of Co Leitrim, and parts of the counties Cavan, Offaly, Sligo, Roscommon and Westmeath.

Two years ago, Bishop Duffy wrote a pastoral letter entitled ‘Sustaining our Faith Community in the Diocese of Ardagh and Clonmacnois’ which alerted people to the profound changes that are coming to our parishes and the practice of faith.

In that letter, Bishop Duffy wrote “…consideration needs to be given to developing and enabling parish faith development and pastoral care to continue and to flourish with fewer priests and with greater involvement of parishioners”.

He said the process was about “reimagining how we worship and pass on our Christian faith”.

Those interested in sending a submission have been asked to keep it to one page and forward it before the end of October to: [email protected]