Home > News > Do not be afraid to answer God’s call: Bishop Duffy

Do not be afraid to answer God’s call: Bishop Duffy

“Do not be afraid to answer God’s call, do not be afraid to explore the possibility and the opportunity” Bishop Francis Duffy of Ardagh & Clonmacnois urged Irish men as he ordained Fr Seamus O’Rourke to the priesthood in St Mel’s Cathedral on Sunday.

“Be assured, if God calls, he will guide and support,” Bishop Duffy said as he emphasised that Jesus continues to call to priesthood.

“Sometimes the call is hard to hear, and may need to be relayed by others,” he explained as he referred to the vocations journey of Fr O’Rourke who is 56 and has had a varied career path and experience of many countries and cultures before he chose to join the seminary six years ago. 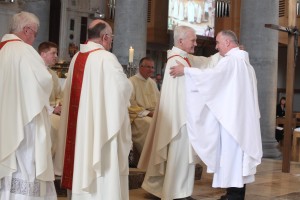 “In many ways answering God’s call is counter cultural. For some God is an irrelevance, for some an irritant and for others an invention. For those who have faith, God is the centre of all things,” he said.

“Answering God’s call, no matter what path we take in life, is something very natural for a believer, challenging and attractive, risky and rewarding, but fully within what it is to be a Christian.”

Referring to Pope Francis’ comment on “the beauty of fraternity among priests” he said priests do not follow the Lord just as individuals, but as members of a community, with “a great variety of gifts and personalities.”

“Priestly fraternity, then, is a conscious choice to be cultivated by each priest in the one great mission of Christ,” he said.

He recalled that priests in the diocese, along with their predecessors, had down through the generations, gone out from their churches and presbyteries to be with all in need.

He paid tribute to the priests who have “faithfully ministered and been mediators of the Good News of Jesus by their work and by their example; the oil of gladness has strengthened and reinvigorated them in their mission. That mission sometimes involves navigating through storms”. 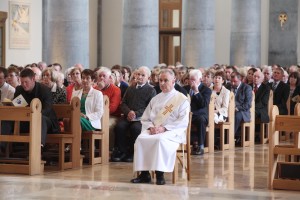 Describing it as “a great time to be a Catholic priest in Ireland”, Bishop Duffy said every context presents opportunities, as Pope Francis put it, to ‘go out to the outskirts where there is suffering’.

He thanked Fr Seamus for his generosity and decision to become a priest.

He joined the Army Signal Corps and was selected for training as a Telecommunications Technician in Cork and DIT Kevin St Dublin.

He subsequently became an instructor at the Army School of Signals (now C.I.S.) in the Curragh and served with UNIFIL in 1979-80.

After eleven years’ service he took up a position as an instructor with the Civil Aviation Authority in Jeddah, Saudi Arabia for three years.

Returning to London he worked as a Technician with British Airways at Heathrow Airport for two years. 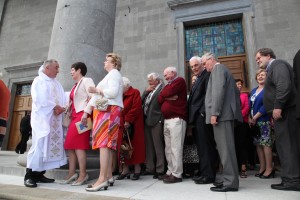 But there was yet to be further turns in his path: he departed British Airways and left for Papua New Guinea where he enjoyed training technicians for eight years.

Following the death of his father, John, in 2001, he worked part-time for Longford VEC and began to study for a post-graduate degree in Technical Communications at University of Limerick.

About this time he took up a position as Network Training Engineer with UPC in Limerick until 2008.

Before entering seminary in August 2009 he spent a number of months in a similar role with BAE Systems in Rochester UK.

In all positions he was driven by a desire to work with others to aid in their holistic development to enable them to realise their full potential in whatever their chosen field or whatever their background.

The idea of priestly vocation runs throughout this career.

Initially, while serving with the Army he made various enquiries outside the diocese as regards priesthood, but getting a sense that he was too old at that stage he continued with his career, yet the thought of priesthood never left him.

All positions and meeting peoples of different cultures and backgrounds were at least to some extent related to God’s work being manifest in different and sometimes complex ways.

While working in London, for example, he took the opportunity to avail of weekend retreats – often involving visits to the homeless on London streets.

Ultimately, it was during a conversation with local priest Fr Peter Beglan following the death of his mother, Monica in 2007 that began the process that led to his entering Maynooth seminary.

His initial meeting with Bishop Colm O’Reilly provided the reassurance and support that resulted in his undertaking the formation journey.

Over this time, further support came from the Director of Vocations, Fr Simon Cadam, Bishop Francis Duffy, other priests of the diocese but even more importantly through the prayers and moral support of many people throughout the diocese, local community, family and friends.

Many questions confront a person discerning a vocation: for Fr Seamus one question kept recurring: “How can I be sure …?”

“We must trust in God’s will – if we constantly seek certainty very few initiatives would be undertaken – how many people would get married for example?”

“Coming to know our Christian vocation is a wonderful adventure. It is part of growing closer to God; part of becoming the person he has created us to be. Like in all walks of life, we strive to be the best at whatever we feel is our calling in life.”

“Being a priest provides an opportunity to work closer with people, to be able to see God’s work in their lives and to share in the joys and sadness, the trials and triumphs of their lives in a privileged way.”

“Since we are all made in the image and likeness of God, getting to know people brings us closer to God.”

“Listening, in honesty and humility to our inner selves is vital for discernment. We may not always be able to explain in words or to rationalise why we have a desire to be a priest.”

“As in this case it might have persisted over several years, a thought that keeps recurring – in a sense it is like a “nagging” feeling but it can also be a recent idea.”

“Seeing the work of God being manifest in the work of priests and other ministers also gives sense of unity and can confirm.”

“Often too we can have a sense of unworthiness – but this is also linked to one’s humility in being one who works closely with the Lord.”

“A willingness to distance one’s self from the things of this world is also indicative of one disposed to a life lived for the Lord – removed from the metrics of worldly “success” from a sense of position or possession frees one to embrace a lifestyle worthy of priestly vocation.”