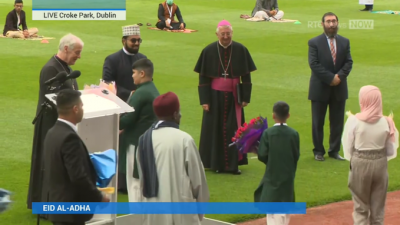 Representatives of Ireland’s Abrahamic faith communities, as well as Government officials, gathered in Croke Park on Friday along with 200 members of the Muslim community for a socially distanced Festival of Eid al-Adha.

Dr Martin said that there was “something special at having this Muslim celebration here in Croke Park”.

Croke Park, the Archbishop acknowledged, “is a special gathering place for Ireland and for all Irish”.  The home of the GAA, he said, has a special place in the history of Ireland.

“It is a place associated with significant, joyful but also very tragic moments of our history. It is a place today where distinguished visitors come. There is an interesting museum here. However, we can also truly say that the entire Croke Park Stadium is a living Museum still being created year by year.”

The Archbishop said the gathering for the Festival of Eid al-Adha marked a new chapter in the history of Croke Park.

Elsewhere in his greeting, Dr Martin recalled Pope Francis’ visit to a Mosque in Baku, Azerbaijan, in October 2016, where he stressed that “meeting one another in fraternal friendship in a place of prayer is a powerful sign, one that shows the harmony which religions can build together, based on personal relations and on the good will of those responsible”.

The Archbishop also paid tribute to Muslim families who enrich Ireland and Irish culture through their hard work and creativity. “I think of the manner in which the younger generations of Muslims in Ireland can today proudly profess their faith and shape the place of Islam in Irish culture.”

While places of worship are important, more fundamental is the witness that is fostered and grows within them and emerges from them in today’s world.

“Our places of worship must be places where intolerance is shunned and respect is learned. Our hearts must be hearts that are open to embrace and not reject. Our hands must be hands that support and help and not push aside. Our mentality must be a mentality that is inspired by compassion and not judgementalism.”

The Archbishop lamented that the world can be so harsh. “It needs mercy and compassion. Our city here in Dublin is tarnished by violence. There is racism and intolerance. We watch as poverty and precariousness grow and new insecurity strikes many families.”

In his reflection at Croke Park, the Church of Ireland Archbishop of Dublin, Dr Michael Jackson paid tribute to Shayk Umar al-Qadri, the Islamic community, Croke Park and the GAA and thanked them for inviting him to attend “a truly historic occasion”.

“I echo the call to peace and harmony that is the lifeblood of faith itself and the calling of all Faiths worldwide,” Archbishop Jackson said.

“We continue to live in a global pandemic that has affected us all and some much more tragically than others. For Faith traditions, as for everyone else in Ireland, the lockdown left us in a position where we could not gather. In specific instances, this meant a virtual Ramadan, a virtual Passover and a virtual Easter.”

Asking what were the sounds of life that crept into the silence of lockdown, Dr Jackson suggested that one of these was neighbourliness.

“The unknown person next door became a neighbour. Care quickly began to go both ways. While many of us had been taught from our youth that it is more blessed to give than to receive, we all learned the positive lesson of humility and of Otherness to the effect that it is just as blessed to receive as to give.”

Elsewhere in his reflection, Archbishop Jackson said kindness is a truth of every faith.

“Kindness is an act of every faithful person. The hospitality of humanity encompasses the person acknowledged, the goodness offered, the listening ear and the intuitive look.”

“Many have died tragically, horribly and alone. Many have had no option but to let their home become a combination of office and school where privacy is eroded and boundaries dismantled. And yet many have learned that kindness is a boomerang of love and of hope. We have all learned that our religious faith and our civic duty work together and need one another to make social sense,” he said.