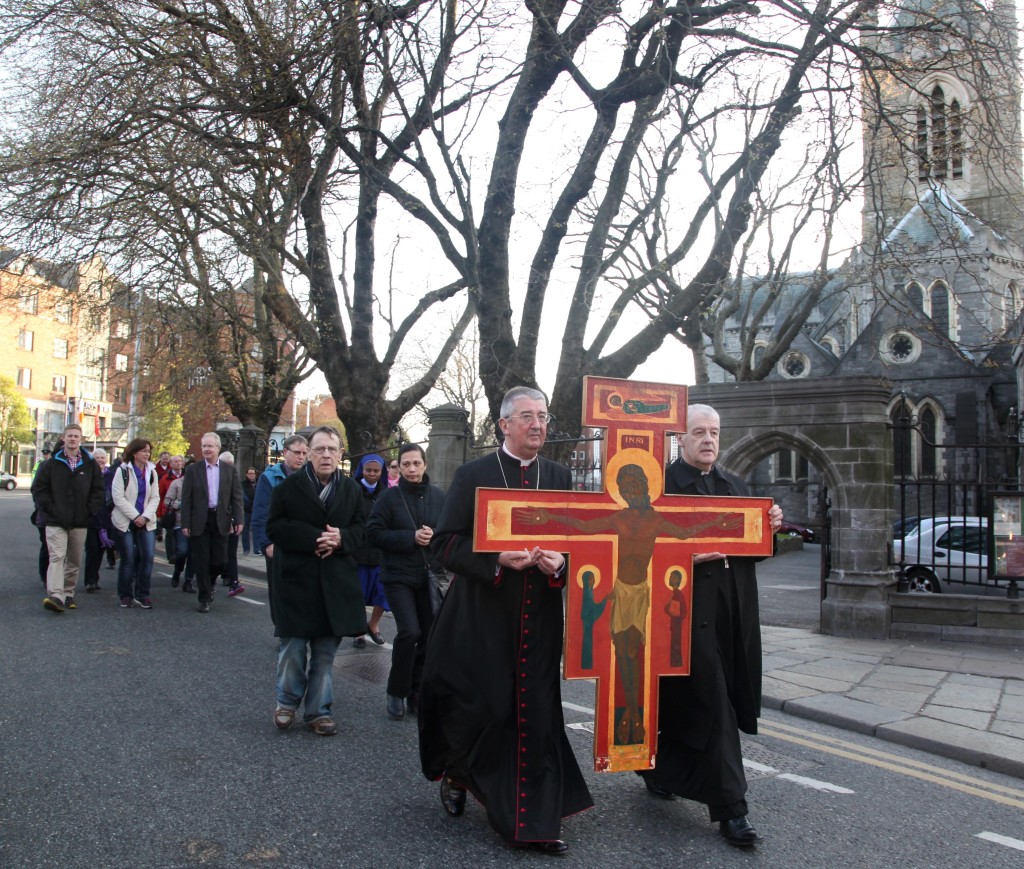 The Catholic and Anglican Archbishops of Dublin led people of all traditions through the streets of the capital on Good Friday evening for the annual Ecumenical Walk of Witness.

The Ecumenical Walk of Witness is a public sign of the Churches’ work and witness together in the wider community.

Earlier on Good Friday, Archbishop Martin led the annual ‘Way of the Cross’ in the Phoenix Park, an event organised by Communion and Liberation.

In his reflection, the Archbishop said that many go on pilgrimage and pilgrim walks, but that the “fundamental walk of the Christian this week is the interior walk with Jesus as he moves step by step to fulfilling the will of his Father.”

This year’s ‘Way of the Cross’ procession was the twelfth to be held in the Phoenix Park in Dublin.

While it began with modest numbers, it has since become an integral part of many people’s preparation for Easter, with more than a thousand attending each year.

The procession began at the Wellington Monument and proceeded to the Papal Cross.

Over the five stages along the route, Gospel readings were read out and reflections were given by Archbishop Martin.

In his reflections, Archbishop Martin said the Christian life should be one of “absolute coherence and integrity”.

But he warned that often we use the language of integrity to cover our lack of integrity.

“We live in a culture of spin in which we believe that we can spin our words in any direction and give the impression that what we say is really what we believe, when we know that it is only a camouflage to cover our own interests.”

He warned that violence is the close relative of betrayal and disregard.

The Primate of Ireland said Jesus was speaking against not just the crude violence of the gun.

“He is speaking of the violence which springs from falsehood, from hypocrisy, from dishonest intrigue, from the manipulation of truth whenever we try to make the unworthy things that go on in our lives and in our Church sound nice or at least less worthy.”

“Jesus stands alone: alone in his integrity; alone in witnessing uncompromisingly,” he said and commented, “Integrity may often leave us also on our own, without allies, open to violence and aggressive behaviour.”

A faith which compromises and tries to find its home in compromise and self-made comfort zones is not faith in Jesus who demands a faith that is coherent and courageous, Archbishop Martin said. 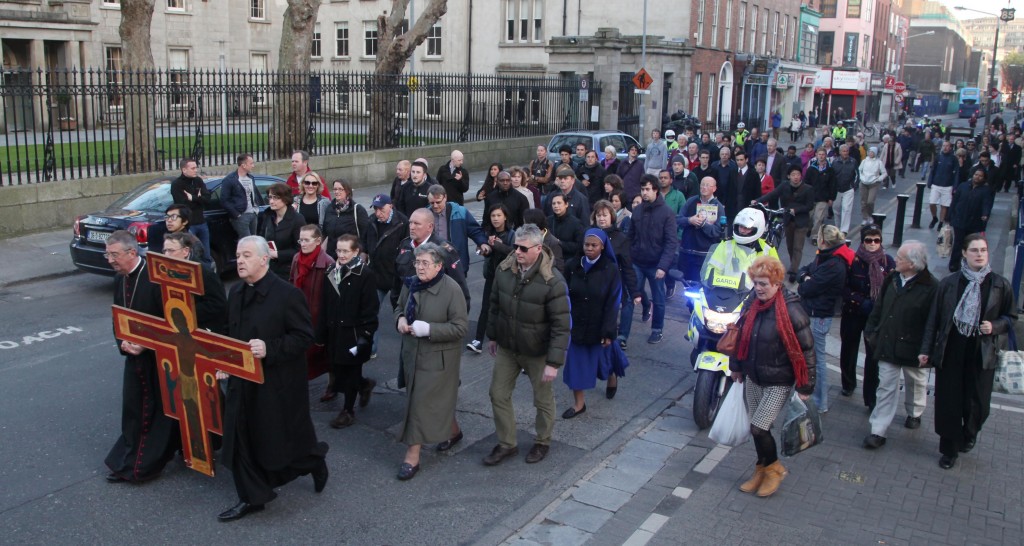 Herod and Pilate are both images of men who lack real integrity and in their scheming and insincerity they even become friends.

Those who lack integrity today form their partnerships and their own clubs. They are drawn to each other and become blind to nothing but their own interests, those attending the Way of the Cross were told.

He noted that “Too often those who are the organisers of evil deeds never appear, but remain hidden in apparent respectability, without the courage even to show their faces.”

“Their poor compromised agents do the dirty work. We see this daily, in the way that those whose business is to ruin the lives of others through drug abuse or criminal violence, never make their faces known, but assign the dirty work to others, not that these can evade the responsibility for what they do.”

Individual acts of corruption and the lack of honesty and integrity cause direct damage, and have a disastrous effect on the fabric of society, on the lives of individuals and on the environment.

“They have effect on our children and our children’s children. They bring only anguish and grief and fear for those who have to come after us,” he said.

“Jesus dies and what seems to be his defeat becomes his triumph. In dying Jesus has destroyed death.  Without faith, death is meaningless. The hope of living beyond death changes the way I should live,” the Archbishop concluded.