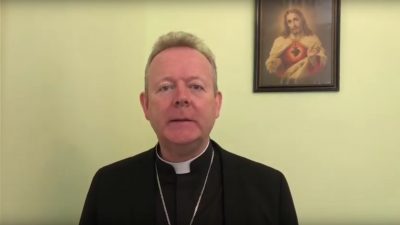 The Primate of All Ireland has revealed that his harshest critics and the harshest mockery he has been subjected to comes from trolls on social media.

In an interview with the Belfast Telegraph, Archbishop Eamon Martin lamented, “The harshest criticisms and mockery nowadays tends to come in social media – often from trolls, or people who have never met me.”

He said he tried to “have a broad back for criticism” and added, “Much of it can be merited and provide an opportunity for reflection, conversion and growth. I ask myself, ‘What are these critics really saying, or searching, for?’”

Explaining how he puts this negative trolling in perspective, he recalled his visit to Iraq in 2018. “I became much more conscious of our Christian brothers and sisters – the modern martyrs worldwide – who have to endure real persecution, oppression and violence for the faith.”

Elsewhere in the interview with the Belfast Telegraph, the Archbishop of Armagh was asked if he is ever ashamed of the Church and acknowledged the “awful crimes and sins of abuse in the Catholic Church continue to cause me shame”.

“I have met many victims and survivors of that abuse who were shockingly violated and left traumatised. As Pope Benedict XVI put it, such abuse has ‘obscured the light of the Gospel’.”

Asked if he is afraid to die, he told the newspaper that he sometimes feels nervous about what the process and experience of dying might be like, “but I’m not afraid of death itself – I see it as the threshold into a new life with God”.

He said he believes in resurrection and in new life beyond this earthly one. “I believe our new life with God in Heaven will be a beautiful one, free from the evil and suffering of this world.”

On whether he is afraid of hell, the Archbishop said he tries to focus on God’s mercy. “I genuinely believe that God does not want anyone to go to hell. God wants me and all of us to turn away from sin in our lives and continually try to do better. I live and hope in Christ and pray that I may never persist in turning away completely from God.”

He admitted that he has sometimes struggled intellectually with reconciling religion with the mystery of suffering and the reality of evil in the world. “It is sad that Christians are divided and, at times, we Christians can even be counter-witnesses to the love and joy of the Gospel. However, that’s precisely where faith comes in. At a personal level, I’ve never doubted God’s existence, or God’s love for me.”

On whether religion has helped or hindered the people of Northern Ireland, Dr Martin responded, “Pastorally, and often quietly behind the scenes, the Churches, via their various outreach projects, have made a huge contribution to community resilience and hope. At times, we might have worked more closely together to present a single voice for peace, reconciliation and solidarity with the poor and marginalised.”

He also revealed that since becoming bishop, “I have very much enjoyed sharing the joys and struggles of my faith journey with the leaders and members of other Christian traditions. I have also become much more aware of how people of other faiths are sincerely searching for the truth. I try my best to witness to God’s love for us all.”

The Archbishop of Armagh said he thought that the Churches today are having to recalibrate their position in society, both north and south, and perhaps this is “helping us get closer to our core mission: to spread the joy of the Gospel in a world that is often preoccupied and somewhat lost”.

Questioned as to why so many people are turning their backs on organised religion, he said that for some, “it’s because they feel that we have lost some of the joy of being followers of Christ; others perceive organised religion as turned in on itself, stuck in the past and out of touch with the struggles and questions of life.”

“On the other hand, there is a growing minority who feel that the Churches have lost their ‘edge’, because they have been diluting the challenging message of the Gospel too much and they no longer stand for anything worth following.”

He revealed that he feels closest to God in church before the tabernacle, or at the consecration during Mass and that he would like the inscription on his gravestone to be: “Be strong, let your heart take courage, all who hope in the Lord” (Psalm 31:24), which is the  verse he chose for his ordination card on 28 June 1987.