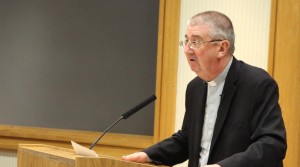 Archbishop Diarmuid Martin of Dublin has called for a new theory of pluralism for Ireland which will help young people in their intellectual search and dialogue on the deeper questions around life and society.

In an address on Archbishop William Walsh, first Chancellor of the National University of Ireland (1908-1921), delivered at the Old Physics Theatre in Newman House in Dublin, the Archbishop underlined that there is no evidence that a totally “religiously neutral secularist society” is the best space in which to foster dialogue between religions.

“There is indeed a sense in which, when it comes down to religious diversity, a more secularist society may not be the best one to be able to understand and guide the phenomenon,” he commented.

He recognised that the young person in today’s Ireland is called to grow towards responsibility within the realities of the culture of the day, influenced by ideas, by life styles, by the basic self-understanding of this concrete society.

“The young person must learn how to discern within that world where true progress is to be found in his or her own personal life and in society as a whole.”

At the same time, the young person has to learn that society is not an abstraction or a force which is absolutely determinant regarding his or her own values and life style, he said.

The Archbishop said education will take place in a particular context, but all of us have the ability and indeed the responsibility to change the context within which education can take place. “To think or act otherwise is the recipe for fundamentalism,” he warned.

He also highlighted that there are forms of secular society worldwide in which hostility to religious values forces some religious groups into a dangerously narrow perception of their culture, into religious fundamentalism, and thus sharpen religious differences and misunderstanding of a pluralist society.

“The desire of a secularist society to reduce religion to the private sphere may make it hard for some to embrace fully the strong religious commitment of others,” he commented.

In his address, Dr Martin said it was his belief that inter-religious dialogue requires “the commitment of persons who are strongly rooted in their own faith, and not just by persons who have confused religious commitment or by people who are not religious at all”.

He added, “What is important, however, is that we all address the situation with a sense of mutual knowledge and respect.”

“Religions are obliged to respect the legitimate autonomy of the secular order and of reason. Imposing a specific political programme in the name of God is to make yourself into God,” he said.

He recognised that the question of where religion can find its place in the overall picture of education is a renewed question in the Ireland of today.

Recalling the contribution and legacy of Dr William Walsh, Archbishop Martin said he had had to fight for equitable access for Catholics to an educational system which was in accord with their convictions.

Catholics felt they were a majority which was excluded.

“Today the question is about the relationship between faith-based education and the rights of those whose viewpoint is different and who feel that they are excluded by a majority which is Catholic.”

Our pluralist Ireland of today needs a new theory of pluralism and the university is the typical space where pluralism can be nurtured, the Archbishop said.

“We need a society where people who believe, people who are searching, people who doubt and people who reject religious values can live in a new mature relationship of dialogue and seeking. Enlightened secular society does not need to fear dialogue with men and women who believe or vice-versa.”