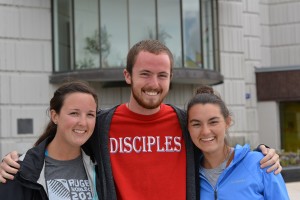 Over 150,000 pilgrims from around Ireland and abroad are expected to attend this year’s national novena in Knock which was officially opened on Friday by Cardinal Timothy Dolan of New York.

In a statement, Archbishop Michael Neary of Tuam said this year’s theme, ‘Faith and Family’, offers much food for thought as the Universal Church prepares for a Synod of Bishops on the Family in the Vatican in October.

The synod will discuss ‘The vocation and the mission of the family in the Church and contemporary world’.

“All are welcome to come and visit Our Lady’s Shrine in Knock over the next nine days to pray during the National Novena to Our Lady of Knock,” Dr Neary stated.

He said pilgrims come to Knock – “a place of hope” – for so many reasons, “whether they are praying for guidance from the Holy Spirit, seeking to further discern their faith, and/or as a holy place of personal or family retreat during the holiday period”.

“For those who are at crossroads in their own lives, and in particular I am thinking of students who have received their final school examination results this week, I urge all to embrace the hope that faith can offer us in our lives.”

Referring to the participation of a pilgrimage from the American Church at this year’s novena, Dr Neary offered “a warm Irish welcome to the pioneering Cardinal Timothy Dolan, and to the pilgrims who accompanied him from New York”.

He added that Knock looks forward to greeting “many more pilgrim-friends from the States in the years to come”.

“For this year’s novena I pray that all pilgrims may draw closer to the Lord and to Our Lady of Knock, Queen of Ireland, who gave hope to our people in a time of distress and comforted them in sorrow, and continues to do so today.” 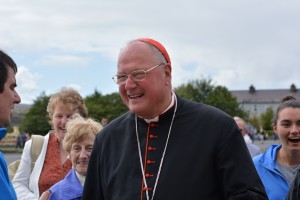 In his homily, Cardinal Dolan paid tribute on the Feast of St Maximillian Kolbe to the Polish Franciscan’s sense of identity.

He died at just 47 years of age in Auschwitz concentration camp.

He recalled attending the Franciscan martyr’s canonisation in October 1982 at which the man whose life was spared by the Polish priest’s volunteering to take his place, Franciszek Gajowniczek, attended with his children and grandchildren.

Addressing the packed basilica, the Cardinal told pilgrims that it was a “joy” to open the novena to Our Lady of Knock.

“I can only hope you understand how much I love Ireland – love all of you – and thank you for this privilege of opening the novena at a shrine so dear to my heart,” he said.

He concelebrated the Mass on Friday in Knock with Bishop Philip Boyce of Raphoe and up to twenty priests.

Among those who greeted Cardinal Dolan in Knock were Cody Churter (19) from Missouri, the same place as the Cardinal himself. The student of chemistry from Franciscan College Steubensville was there along with Clarissa Sutter (20) from South Carolina, who is studying business management at the Franciscan University of Steubenville, and Ashley Veazey, who turns 20 today who is studying nursing at Steubenville.

They came to Knock especially to see Cardinal Dolan and to make their first visit to a shrine where an apparition has occurred.

They are travelling on to Austria today and were astounded that they were able to get to meet Cardinal Dolan by a number of happy coincidences, causing Clarissa Sutter to shed some tears of surprise and joy.

The story of Knock began on the 21 August 1879 when Our Lady, Saint Joseph and Saint John the Evangelist appeared at the south gable of Knock Parish Church.

This miraculous apparition was witnessed by fifteen people, young and old. Knock is an internationally recognised Marian Shrine and was visited by Saint John Paul II as part of his 1979 papal pilgrimage to Ireland.

During his visit, which coincided with the Shrine’s centenary year, the late pope celebrated Mass at the Shrine and addressed the sick, their helpers and pilgrimage directors.

Archbishop Michael Neary, Archbishop of Tuam, is the custodian of the Marian Shrine and Father Richard Gibbons is parish priest of Knock and rector of the shrine. Please see: www.knockshrine.ie