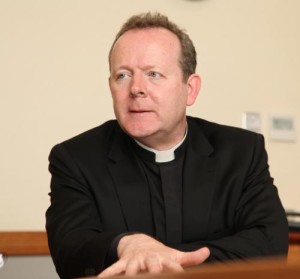 Archbishop Eamon Martin of Armagh has called on the faithful to promote the Irish bishops’ Rosary Sunday prayer initiative.

Speaking during Knock’s annual nine-day novena, the Archbishop invited people to pray the Rosary for the intention of the family.

In this way, they could link with those gathered in Rome for the Synod on the Family in October.

The bishops announced the initiative following their June 2014 General Meeting in Maynooth as a way of encouraging the practice of the much loved family prayer.

“This prayerful initiative has been scheduled to take place during October, the month in which the recitation of the Rosary is especially promoted,” the Archbishop said.

He continued, “Rosary Sunday is an invitation to people in parishes, in homes, and in religious congregations to pray the Rosary for the intention of the ‘Family’.”

“The once-common tradition of the family Rosary links very well with the theme of the Synod on the Family in Rome which takes place from 5 – 19 October.”

“I encourage all parishes and faith communities to join on this special occasion to pray for the intention of the Family. In praying the Rosary we meditate on the life and ministry of Jesus Christ and the life of the Holy Family.” 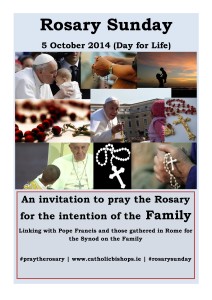 “In a particular way on Sunday 5 October we pray that the Gospel of the Family will be proclaimed faithfully and joyfully by all who turn in prayer to the Mother of God.”

Archbishop Martin concluded, “Pope Francis has recommended the Rosary as a form of ‘spiritual medicine’, saying ‘it’s good for your soul, for your whole life.’”

This was followed annually by crusades in different parts of the world.

Fr Peyton left his native Attymass in Ballina at the age of nineteen. He contacted tuberculosis while studying for the priesthood two years before his ordination.

He started his Rosary Crusade in thanksgiving to Our Lady for his recovery from that illness. Fr Peyton brought the crusade to Ireland during the Marian Year of 1954 and from April to August he visited the dioceses of Tuam, Galway, Clonfert, Achonry, Elphin, Killala, Down and Connor, Meath, Waterford & Lismore, and Ferns.

The twenty-first and final rally was held on Our Lady’s Island, fourteen miles from Wexford town, and it was attended by 40,000 people.