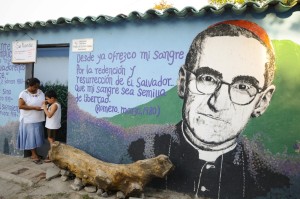 Archbishop Oscar Romero will be beatified today in San Salvador.

Pope John Paul II opened his cause in 1997, but it was Pope Francis’ declaration that he was a martyr earlier this year that paved the way for today’s ceremony.

Oscar Romero was appointed Archbishop of San Salvador in February 1977.

The next month he issued a report in which he noted that the recent election in El Salvador had been followed “by a wave of violence which included the killing of peasants and the torture of political dissidents.”

He added, “The Church cannot do anything less than raise its voice when injustice has overpowered society. It cannot remain quiet when human rights are trampled.”

He had spent the day at a meeting with priest friends organised by Opus Dei, where they reflected on the priesthood. A day earlier in a sermon he had called on Salvadorian soldiers, as Christians, to obey God’s higher order and to stop carrying out the government’s repression and violations of basic human rights.

The bishop had a strong working relationship with Trócaire which is rejoicing in today’s event.

Trócaire funded the El Salvador Human Rights Commission which the Archbishop founded in response to the killing of thousands of people.

Just two weeks before his tragic assassination in 1980, the Archbishop wrote to the agency requesting financial assistance to replace a destroyed radio transmitter.

“I would like once more to thank your kindness and preoccupation for our country and our Church and the kindness of the Irish Bishop’s Conference and Trócaire’s,” he wrote.

Bishop Eamon Casey, Chairman of Trócaire  at the time, described Romero as “a true, present day martyr of the Church”.

Bishop Casey attended Archbishop Romero’s funeral, narrowly escaping injury when a death squad opened fire on the huge crowds that had gathered outside the Cathedral.

Bishop Casey helped to bring people to safety inside the Cathedral, spending almost two hours with the sick and injured.

Many villages were wiped out.

“This programme was one of the most dangerous in Trócaire’s history,” said Communications Officer Eoghan Rice. “Before the Salvadoran Peace Accords were signed in 1992, more than 180 of Trócaire’s close partners had lost their lives.”

“Archbishop Romero was a man who used his faith and his position to defend and protect the weakest members of society,” said Éamonn Meehan, Executive Director of Trócaire.

“He was an outspoken champion of the powerless and the poor, and was ultimately murdered for his unflinching defence of human rights.”

Mr Meehan said Archbishop Romero once said that if he was killed he would rise again in the people.

“Today, people in El Salvador and throughout Central America continue to put themselves at huge personal risk in order to continue his mission. Trócaire’s partners and friends in the region continue to suffer violence and repression for speaking in defence of basic human rights and justice.”

Speaking ahead of the beatification ceremony, the Primate of All Ireland, Archbishop Eamon Martin said, “In this year of the fiftieth anniversary of the conclusion of the Second Vatican Council, the universal call to holiness as taught in Lumen Gentium (Light of Nations) is something that we all need to hear again and again.”

“The beatification of Archbishop Oscar Romero in San Salvador gives us some really important expressions of this ‘call to holiness’. To be holy must also include a concern for the poor and the marginalised.”

“Our care for those who suffer from injustice and rejection is a critical part of the journey to sanctity.  Archbishop Romero’s beatification as a martyr also reminds us that we must be prepared to endure opposition if we are to truly live as Jesus called us to live.”

“My prayer is that this declaration of a new Blessed will encourage all of us in Ireland to respond ever more fully to that universal call to holiness.”

In a statement, the group said that after 35 years of being ignored by the Official Church, it took Pope Francis with a Latin American background to finally acknowledge his martyrdom.

“Over thirty-five years powerful forces, both within the Vatican and El Salvador, had successfully thwarted any official recognition of Monsenor Romero even though other Christian communions had already done so,” the group said in a statement.

They referred to the Anglican Church’s placement of his effigy among the great prophets of our age at Westminster Abbey, London.

“Monsenor Romero is the planetary symbol of a faith committed to the defence of the oppressed and being a voice of the voiceless.”

“Romero represents all the Latin American martyrs of the past half century, consisting of thousands of nuns, peasant leaders, community leaders, priests and bishops killed by regimes that claimed to be catholic.”

According to WACI, Archbishop Romero showed a different way of being Church: “he amalgamated the traditional and popular religiosity of his people with the defence of the oppressed and resistance to violence and oppression”.

“It is important to realise that Romero was not assassinated by atheists or adherents of another religion. His death is an example of martyrdom “in odium fidei” (hatred of the faith) as he was murdered by other catholics who went to Mass, and who considered themselves the true believers of the Gospel and who wanted to defend God and catholic ‘values’.”

WACI said Archbishop Romero followed Jesus faithfully and like him denounced the injustices as he found them and demanded justice for his people.