Home > News > Archbishop strikes back at efforts to marginalise Church

Archbishop strikes back at efforts to marginalise Church 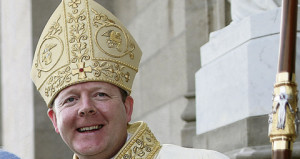 The Catholic Primate in waiting has hit out at attempts to marginalise the Church from the public square and defended its right to make its views known on issues such as abortion.

Speaking on Sunday evening at St Oliver Plunkett Church in West Belfast for the Féile an Phobail celebrations, Archbishop Eamon Martin warned that there are those “who would want the voice of faith and religion relegated to the privacy of our homes and churches and kept far away from the cut and thrust of public discourse.”

He emphasised that people of faith were not trying to create some kind of church state, and cited the teachings of the Second Vatican Council which make it clear that Catholics ought not to interfere with the ‘legitimate autonomy’ of socio-economic, political and cultural affairs.

But that does not mean that religion has no part to play in the national conversation, Dr Martin said.

“Why shouldn’t a Catholic politician, or lawyer, or teacher, or person of any profession for that matter, be able to confidently and unapologetically express their sincerely held faith-based arguments in the public square without fear of ridicule or being branded a bigot or against freedom?”, he asked.

The Catholic leader challenged those who want to edge the Church out of the public square on whether that was truly pluralist.

“Surely the mark of a truly pluralist society is one which will allow people of all faiths and none to express and act upon their conscientiously held views, particularly on a matter as critical as the upholding of all human life.”

Referring to the recent debate around the introduction of abortion legislation in the Republic, Archbishop Martin said the Church’s arguments on the abortion issue drew on reason and faith as well as an integral vision of the dignity and vocation of the human person linked to the common good.

But the tendency in public debate is to relegate discussion about the natural identity of the human person to the private sphere and instead to prioritise freedom, or more precisely, individual rights and freedom as the fundamental value and greatest good, he warned.

“We appealed strongly to rational argument that the life and dignity of the most vulnerable and innocent human persons ought to be upheld by society; we pointed out the contradictions inherent in an Act entitled ‘the Protection of Life during Pregnancy Act, but which permits in law the deliberate and intentional killing of an unborn child and which, with no time limits, opens up the possibility of the destruction of an unborn child right up to the moment of birth.”

“We also argued about freedom of conscience, the right to a free vote for politicians on the issue, and to conscientious objection for anyone who does not want to cooperate in any way, however indirectly, with abortion. With the backing of psychiatrists and doctors, we pointed to the flaws of introducing abortion as a response to suicidal ideation.”

“Throughout the debate we kept clarifying Catholic Church teaching, that ‘where a seriously ill pregnant woman needs medical treatment which may put the life of her baby at risk, such treatments are ethically permissible provided every effort is made to save both the mother and her baby’.”

“We were clear that this is different from abortion, which is the direct and intentional taking of the innocent life of the unborn and which is and always will be gravely wrong no matter what legislation is passed in any country.”

All of these he described as strong arguments. He said it was, however, worth reflecting on some of the reactions to the Church’s involvement as people of faith in this debate.

“Some were on the attack immediately pointing to the child abuse scandals and the Church’s abysmal record of protecting the lives of children in the past, as if that means we should not attempt to speak up for the protection of the most innocent human life in the present.”

“Others pointed out that the bishops being a group of aging celibate men have no right to interfere with a woman’s right to choose what she wants to do with her body.”

He said this was why the pro-life arguments were most powerfully led in the media and the public square by dedicated and articulate lay men and women.

He also highlighted the arguments, made by several senior politicians, that whilst bishops are entitled to their views, they as politicians have to legislate for all the people, for the public good.

“So it was implied that somehow access to abortion is for the public good, but even more significantly, that politicians themselves, even if they be practising Catholics, must leave their faith outside the door when they are entering the legislative chamber.”

The Archbishop added, “It would hugely impoverish our faith if we were to compartmentalise it or exclude it completely from our conversations and actions in the public square.”

He said he believed it would also impoverish society if the fundamental convictions of faith were not permitted to influence public debate; it would diminish the understanding of the human person and dilute the concept of the common good.

Arguing that the Church’s tradition of moral reasoning was based upon natural law and accessible to all people of good will even if they do not share a Catholic faith commitment, the Archbishop said it was desirable, therefore, during this Year of Faith that the Church begin to encourage dialogue and seek common cause with other groups and individuals who are working for the common good, and with those who are honestly seeking what is true but who might appear to be arriving at the wrong conclusions.

He also underlined that the Church’s arguments in future must be able to balance charity and truth – they must be at once gentle and patient, but firm and persuasive.

We are not there to impose, but to invite; we are not there to simply oppose, but to offer the gift and message of salvation.  The Council’s declaration on religious freedom, Dignitatis Humanae puts it so profoundly: ‘The truth cannot impose itself except by virtue of its own truth, as it makes its entrance into the mind at once quietly and with power’.

The Year of Faith challenged the Church to find ways of presenting in public discourse ‘a coherent ethic of life’, based on natural law, which includes for example, our teaching about the sacredness of human life and the dignity of the person, about the centrality of the family, about solidarity and the common good, the need for a fair distribution of goods in the world.

Recapping on the Year of Faith up to now, Archbishop Martin recalled that it included so far the Synod in Rome on New Evangelisation; it has included the stunning announcement in February of Pope Benedict’s resignation; and then we had the election of a new pope, the first Jesuit pope, the first pope from the southern hemisphere, and the first Francis!

The Year of Faith also included the announcement that Pope John XXIII and Pope John Paul II will be canonised soon, World Youth Day in Rio de Janeiro and the publication of Lumen Fidei (The Light of Faith), begun by one pope and completed by another.

He warned the faithful that in scrutinising the signs of the times it is important not to fall into despair or to nostalgically try to turn the clock back in search of some past when things seemed less muddled more ‘black and white’.

“This is our time. Our calling is to be part of the Church’s mission for today.  In declaring a Year of Faith Pope Benedict called on us to respond NOW to the ‘profound crisis of faith’ and  ‘to lead people out of the desert, … towards friendship with the Son of God …  who gives us life, and life in abundance’.  As Gaudium et Spes put it: ‘the future of humanity rests on those who are capable of handing on to the coming generations reasons for living and hoping’.”

“What more exciting or challenging a mission could there be for us in this Year of Faith!  To hand on to our children reasons for living and hoping!”