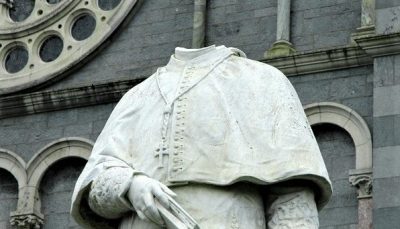 Gardai have so far failed to establish a motive for the criminal damage and theft of the head of the marble statue of Archbishop Patrick Leahy in the grounds of Thurles Cathedral in June despite “extensive” inquiries.

On Sunday, Inspector James White of Thurles Garda station spoke to the media outside the Cathedral of the Assumption and jointly appealed with Archbishop Kieran O’Reilly for information about the missing statue head.

Archbishop Leahy was Archbishop of Cashel & Emly from 1857 – 1875 and oversaw the construction of the Cathedral of the Assumption in Thurles.

Dr O’Reilly announced that a parish committee is offering a reward for information leading to the recovery of the missing piece of the statue.

Standing on the steps of the cathedral surrounded by local parishioners the Archbishop noted, “It is now nearly five months since the statue was damaged.” He added that the damage to the statue and removal of the head had “upset the people of the archdiocese and, in particular, the people of the town of Thurles.”

“I appeal today to any person who may be able to provide information about the incident or the whereabouts of the damaged piece of the statue to come forward.”

The statue was raised in Archbishop Leahy’s honour in 1911 and was specially commissioned from an Italian marble workshop.

The removal and theft of the head, Archbishop O’Reilly, told CatholicIreland.net was “a very strange and a very sad thing to have happened”.

Inspector James White explained that, “Since June we have carried out a huge number of inquiries regarding the theft and the criminal damage to the statue of Bishop Leahy. To date unfortunately we have not been able to establish a motive behind this act of wanton vandalism and theft.”

Asked if the Gardaí were following any specific lines of inquiry, Inspector White responded, “At the moment we are keeping very much an open mind regarding it, so our appeal today is a very general appeal regarding perhaps the motivation behind this crime or anyone with any information regarding the whereabouts of the head or those involved in the crime.”

Inspector White said the Gardaí had been “unable to determine exactly what was used to remove the head”.

They have appealed to anyone with any information as to what tools or implements or equipment were used or to the motivation of the person or persons responsible for the theft to contact them.

Archbishop Kieran O’Reilly told Catholicireland.net he did not think last June’s theft had an anti-Catholic motivation.

“I wouldn’t attribute it to that because we have a beautiful Calvary shrine (opposite to the statue of Archbishop Leahy) and I think if it was anything to do with Christianity that would have been targeted. They would have left some mark or sign and nothing like that happened.”

Dr O’Reilly described the decapitation of the statue as “very strange” and added, “It just makes no sense.” All traces of the cutting into the stone were cleaned up he said, explaining no chips of marble were recovered when the theft was discovered at the end of June.

The torso of the statue, which stands on a plinth, is now completely enclosed behind wooden hoarding.

“It is a very unusual thing to have happened and as inspector says it is very difficult to understand why it would have taken place.”

He said that as the statue stood on a pedestal, it was quite high and that the head couldn’t be reached from the ground. “So, you had to plan it or organise it,” he stated.

Work had been carried out on the front of the cathedral just a couple of weeks prior to the theft and as a result, the Archbishop said people might not have taken any notice of someone on a ladder in the grounds of the cathedral, presuming it was part of ongoing repairs.

He said people locally were “all very upset. This is a cathedral town; they are very proud of their cathedral and very proud of the statue that was there. It is an affront to the town that something like this would happen and to the archdiocese as well.”

Local Fianna Fáil councillor, Sean Ryan, told CatholicIreland.net on Sunday that there was a great sense of sadness in the locality over what had happened.

“This was foisted on us last June. There is no sense of logic to it. Nobody thought that somebody would go and literally take the head off a statue that had been there for over 100 years. The people are very upset over it.”

“I raised it at a community policing meeting a couple of months ago and they don’t seem to have a definite line of inquiry.”

“The whole head was taken clean off it. It is incredible that nobody has seen anything. So hopefully from this appeal we’ll get some information on it because it has left a real cloud of sadness around Thurles. There has been a lot of work done on the cathedral and people have given very generously and it means a lot to people in the town. To think that somebody would do this is incredible,” said Cllr Ryan.

Archbishop O’Reilly said that the appeal was being made now because “in the new year we need to move on and see how to replace the head if we can’t have any sign of it.”

He explained that with technology and photographs they believe they can re-create the head as the Italian workshop which produced the statue over 100 years ago may no longer operate.

“At least if we knew that the statue was now dust or that it couldn’t be used any more – fine. But if it was repairable, we would like to be able to do that and put it back up,” the archbishop said.

Archbishop Patrick Leahy (1806-1875) was Archbishop of Cashel & Emly from 1857-1875. He undertook the building of the Cathedral of the Assumption in Thurles. He participated in the First Vatican Council and was highly regarded in the Ireland of the 19th century.

In appreciation of his ministry and work in building Thurles Cathedral, a statue was erected in his honour in the forecourt of the Cathedral in 1911.

Anyone with any information whatsoever regarding this matter is asked to contact Thurles Garda station at 0504 25100 or the Garda confidential line 1800 666 11.