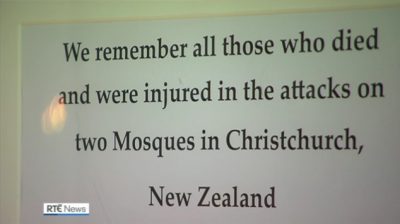 In a gesture of solidarity with the people of New Zealand and the Islamic faith worldwide over the massacre of 50 people at two mosques in Christchurch, Archbishop Diarmuid Martin of Dublin held a service of silence and prayerful reflection on Sunday morning.

Ahead of the traditional Aifreann Lá le Pádraig, celebrating the Feast of St Patrick and the blessing of the shamrock at 11am in St Mary’s Pro-Cathedral, attended by President Michael D Higgins, the Archbishop commemorated the 50 innocent people who were brutally slain on Friday.

He said the service was a rejection of all forms of religious and racial intolerance by Christian believers.

“We are all of God’s same race. Hatred and intolerance that in any way undermine that fundamental unity of human kind are an attack on the God who created us as a single human family,” Archbishop Martin said.

Over the weekend, hundreds of people have been signing a book of condolence for the victims of the Christchurch shootings at the Pro-Cathedral in Dublin.

On Friday, Archbishop Martin asked parishes in the Archdiocese of Dublin to have prayers said at all Masses in remembrance of those who died and those who were injured in the attacks which Dr Martin described as “a deplorable event of world dimensions”.

“I felt that it would somehow be incongruous to hold our regular joyful celebration of the Feast of St Patrick here in the Pro-Cathedral, without first finding a moment to pause and reflect on a horrific event which took place on the other side of the world but which involves us all,” the Archbishop said.

To attack people of prayer just because they were of a different faith was, he said, something that “offends Christian culture; it offends our own Irish culture just as it offends the culture of New Zealand, a country known for its tolerance and welcome”.

In silence, the congregation remembered those who were killed, those who mourn for them and those injured.

Elsewhere in his reflection, Archbishop Martin said the Christian faith stresses the unique dignity of every human person and insists equally on the unity of the human family.

“While throughout history there may have been dispersion of peoples or the accentuation of difference, all people are essentially destined to form one sole family according to God’s plan established `in the beginning’. We are all of God’s same race.”

He said the eradication of racial and religious prejudice demands a change of heart and calls for a strengthening of spiritual conviction.

“Racism and religious intolerance cannot ever be allowed to assume even a token tone of respectability or reasonableness. There is no such thing as half racism. There is no way any society can think that racist or religious tolerance should have any place within it.”

He also stressed that the Church and Christian believers must constantly be alert not to fall prey to the temptation of intolerance.

“History shows that when racism and religious intolerance are not addressed they contain within themselves a frightening power for fostering hatred and social destruction.”

“We celebrate the Feast of St Patrick, our national feast. We thank God for the gift of tolerance and respect which we can enjoy in our nation. We pledge ourselves to rigorously defend and foster that gift.”

On Saturday, the Vatican said Pope Francis had “commended to the loving mercy of Almighty God” all who died in the attacks on two mosques in Christchurch and is praying for “the consolation of those who grieve the loss of their loved ones” and for the healing of the injured.

On Friday, Archbishop Martin issued a statement expressing his shock at the “horrific shootings” at the two mosques in Christchurch.

He also expressed his concern about anti-Islamic sentiments being expressed in social media in Ireland and even in publications purporting to be of Catholic inspiration.

“All of us, of whatever religious tradition, can identify with what that might mean for a congregation gathered for worship.”

The Bishop, who is chair of the Council for Life of the Irish Catholic Bishops’ Conference said, “Responsibility for these attacks clearly rests with some violent individuals.

“At another level, however, there are serious questions to be answered, including in our own society, by those who unjustly blame the entire Muslim community for the extremism of some. It is just as unacceptable to speak and write in racist or sectarian terms against Muslims as it is to speak and write in similar terms about Christians.”

“May the merciful God gather to himself all who have died while at their Friday prayers and console those who have been hurt.”

The Bishop of Elphin asked that the victims of the massacre be remembered in churches this weekend.