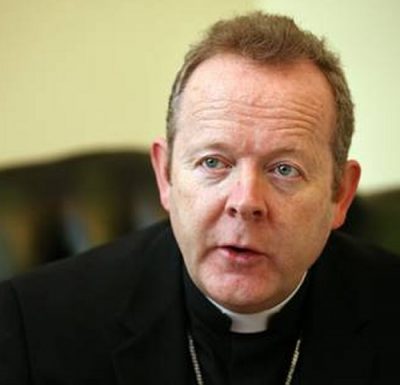 Archbishop Eamon Martin of Armagh is praying for the elderly man who was injured when a stolen car ploughed into people attending the annual blessing of graves at a Dundalk cemetery on Sunday.

The ceremony was organised by St Patrick’s parish, which is located in the Archbishop’s diocese.

Speaking to Catholicireland.net on Sunday evening, Dr Martin said he was “really shocked” to learn of the “terrible experience” of people attending the blessing.

The injured man sustained a head injury when he fell to the ground after he was struck by the car driven into the crowd at St Patrick’s Cemetery in Dundalk, Co. Louth on Sunday afternoon.

It is believed the car, which had been parked in the graveyard, was stolen. It had been driven at speed through the graveyard, where thousands of elderly people and families had assembled. Gardaí arrested the male driver.

Archbishop Martin said the parish priest, Fr Mark O’Hagan, had told him of “the terrible traumatic and frightening experience for everyone”.

At the time of the incident, Archbishop Martin was consecrating Bishop Michael Router as the new auxiliary bishop of Armagh in St Patrick’s Cathedral in Armagh.

“As you know the blessing of the graves is a very emotional ceremony. People turn out every year to be with their families and their close friends. They are standing at the graves of their loved ones. If someone has died recently, they are feeling quite raw in their emotions. In the middle of all of that, it appears a man seems to have been out of control. I think it was a terrible shock and fright for everyone.”

He added that his prayers “are with the man who has been injured, hoping that he will recover soon”.

He said the incident is “an opportunity for all of us just to think how fragile our lives are. We have to look after each other and take care of each other at all times.”

In his homily for the episcopal ordination of Bishop Router, Archbishop Martin told the Co. Cavan priest that he was called as bishop to be “a devoted father and a brother who loves all those whom God places in your care – especially the priests and deacons who share with you the ministry of Christ”.

He added, “You are asked to be a good shepherd, praying and caring for the whole flock, loving especially the poor and infirm, the stranger, and those who are isolated, lost or going astray.”

Referring to Sunday’s Gospel story about Martha and Mary, Dr Martin said his sympathies often lie with “poor Martha – who ended up rushing around, fussing and fretting to make sure everything possible was being done for her guest, while her sister Mary sat quietly at the feet of Jesus, enraptured as he spoke to her.

“You will find, as a bishop, that it is very easy to get pulled this way and that, with so many demands, duties, meetings and administrative responsibilities, that it is not always easy to find time to be still in the presence of the Lord, and to listen to Him in prayer.”

As auxiliary bishop in the Archdiocese of Armagh, Bishop Router will support Archbishop Martin’s assignment as Apostolic Administrator of Dromore diocese.

“Fr Michael, you will find life as a bishop to be fulfilling and interesting – although not without its challenges! The role and ministry of a bishop has changed immensely since the appointment of the first auxiliary bishop to Armagh, Bishop William Conway, who came to us from Down and Connor more than sixty years ago.”

Archbishop Martin said that the burden of administration has grown much heavier since then, and the needs of people, priests and society have become more complex.

“The Church’s teaching on many important social and moral issues, including marriage and the sacredness of all human life, has become increasingly countercultural. With the decline in religious practice and fewer vocations to the priesthood and consecrated life, we have once again entered ‘mission mode’ here in Ireland, and sometimes it’s difficult to discern precisely where the Holy Spirit is leading us.”

However, he added, despite all this change, the fundamental calling of the bishop remains as it has been handed down to us since the earliest days of the Church.

He recalled Pope St John Paul II’s words 40 years ago when he spoke of the danger of becoming so immersed in the work of the Lord that we forget the Lord of the work. Speaking in Maynooth in 1979, the Polish Pontiff said, “Your first duty is to be with Christ”.

Last August Pope Francis spoke to the bishops of Ireland at the end of the World Meeting of Families and told them that the first duty of the bishop is prayer.