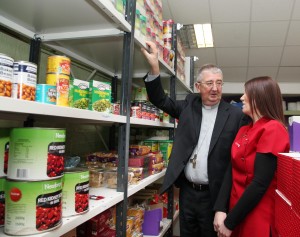 Archbishop Diarmuid Martin of Dublin has thanked the parishioners of his diocese for their “extraordinary” response to the Crosscare food appeal and the church collection on behalf of the people of Syria and the Philippines.

In a letter read out at Masses in Dublin’s parishes, Archbishop Martin expressed his “great appreciation” for parishioners’ generosity.

In total, €1.3 million was raised within the Archdiocese of Dublin for the Philippines and Syria and individual contributions are still coming in.

Separately, parishioners from all over the diocese donated 70 tons of food to their local churches over the past four weeks following the Archbishop’s appeal at the end of November.

That followed a call for help from Crosscare’s food bank as it struggled to keep up with demand from families in need.

“The response to the food appeal was extraordinary. Crosscare staff – with up to 30 years’ experience – tell me that they have never experienced such spontaneous generosity,” Archbishop Martin said in Sunday’s letter.

He noted that the tons of food donated were exactly as requested – tinned and other non-perishable produce which can be effectively distributed.

“Parishes have not just collected food but have provided transport to store places. We have also received contributions from schools and institutions, including from the detainees of one prison,” he said.

While the food bank is now replenished, the Archbishop said demands on its services continues to grow.

“This week, in one parish, food parcels had been prepared for 30 scheduled families and 85 turned up. Thanks to your generosity everyone received what they needed.”

He concluded his message by thanking the faithful for their generosity and praying that “we will all – and especially the children – experience the simplicity and happiness that comes with the birth of Jesus.”