Home > News > Archbishop pays visit to school on its “uppers”

Archbishop pays visit to school on its “uppers” 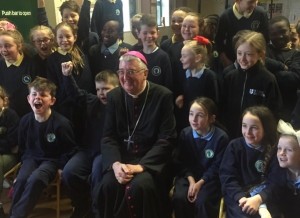 Archbishop Diarmuid Martin gave a show of solidarity to an inner city Dublin school on Thursday which is facing the loss of a much needed teacher and whose falling enrolments are linked to spiralling accommodation costs in the private rental sector.

Our Lady of the Wayside National School in Bluebell is likely to lose a teacher when the next academic year commences.

According to the school principal, Anne McCluskey, “Austerity was harsh on families in this area, it seems that economic recovery is not bringing them any benefits, not yet at any rate.”

The school was founded in 1960 and currently has 108 pupils from diverse backgrounds including Traveller children, children of immigrant parents and pupils from disadvantaged families.

Ms McCluskey explained that due to the low income status of attending families, the school has a limited capacity to fundraise and the successive cuts to the school’s budgets are now impacting adversely on the pupils.

She told CatholicIreland.net that the school is “absolutely on our uppers” and can “barely make ends meet”.

The principal called on the Department of Education to restore the Traveller education budget, the capitation grant to 2010 levels, and to give an annual fund to schools like hers which are more than 30 years old and need additional resources to maintain older infrastructure.

Our Lady of the Wayside she warned, “is now at a critical state”; there has been no caretaker for the past four years, and there are major issues of disrepair and maintenance, linked to the fact that the building is over 50 years old.

“Any funding we do receive is being absorbed into our increasing running costs,” she explained.

The school recently lost a number of its pupils when their families rental properties were put up for sale or the rents were hiked.

“A huge number of our parents started coming to us saying their landlord was putting up the rent and they couldn’t afford it, or their landlord was selling the house and they had to move house. All of them tried to stay in the area but the families of eight children had to move out of Bluebell to seek accommodation in other areas – some were briefly in homeless accommodation.”

However, she warned that if the school lost a teacher it would leave it ill prepared for the potential rise in demand for places which is coming down the line in the near future with the proposed construction of up to 1,000 residential units locally.