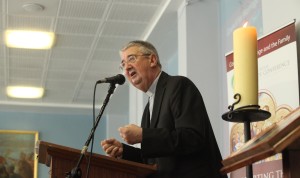 A major challenge for the future of the Catholic Church in Ireland is the issue of women and the Church’s teaching on sexual morality, Archbishop Diarmuid Martin of Dublin has acknowledged.

In an address on ‘The Church of the Future’ which he delivered at St Michael’s Church of Ireland parish in Limerick on Tuesday evening to mark the parish’s 175th anniversary celebrations, Archbishop Martin said “The manner in which the moral teaching of the Church is presented to believers is far too often not adequately situated within the overall context of the teaching of Jesus, which is both compassionate and demanding.”

And so the Church’s teaching is either not understood or is simply rejected as out of tune with contemporary culture.

He said the Catholic Church had to take a critical look at the dominant role it assumed in Irish society, while at the same time not renouncing its prophetic role.

He also underlined the need to take “a radical new look at the formation of future priests”.

Acknowledging that a culture of clericalism is hard to eliminate, he stated, “It did not come out of nowhere and so we have to address its roots in seminary training. There is no way we can put off decisions regarding the future.”

Speaking of the kind of leadership the Catholic Church in Ireland needs in the future, he said the term ‘synodality’ was a current buzzword.

Catholic Church leadership must represent the various charisms present in the Church: lay, clerical and religious, women and men, young and old, he suggested.

“We all agree on this, but nothing seems to happen. The alienation of so many women only increases,” he lamented.

The Primate of Ireland was highly critical of the Vatican-imposed Visitation to the Irish Church that followed in the wake of the Murphy and Cloyne reports into clerical sexual abuse.

“It is well known that I was unhappy with many aspects of the Visitation and its results. Despite the good intentions, the Visitation froze the renewal of the Irish Church for some years, while it waited years for results that were disappointing.”

He also highlighted how a number of dioceses were left vacant without a bishop for years.

“Some of the ideas of the Visitation were then put back into the freezer, such as a reduction and rationalization in the number of dioceses. I believe that this is still necessary, as is the revision of the arcane workings of the Irish Episcopal Conference.”

Though the Catholic Church in Ireland is coming out of one of the most difficult moments in its history, he said the light at the end of the tunnel was still a long way off.

“The Catholic Church in Ireland will have to live with the fruits of its actions and its inaction and with the grief of its past, which can and should never be forgotten or overlooked. There is no simple way of wiping the slate of the past clean, just to ease our feelings.”

But he also underlined that the Catholic Church in Ireland cannot be imprisoned in its past.

“I have found their spiritual fragility somehow has given them, in fact, a deep spiritual strength, from which I have profited. For that, I thank them,” he said.

His hope was that the future of the Church in Ireland would be one where it truly learns from the arrogance of the past and finds anew a fragility that would allow “the mercy and the compassion of Jesus to give us a change of heart and allow others through a very different Church to encounter something of that compassion and faith for their lives”.

On the issue of Church and society, Dr Martin said that the world and the culture of Irish life have changed. Yet the Church continues in many ways to live in a way that fails to recognise that culture has changed so much.

“Irish culture has drifted from being the culture of an enlarged faith community into a heavily secularised culture. For many, faith no longer plays a major role in their lives and they feel that this in no way compromises their ability to be good, honest and caring people. Believers, albeit unknowingly to themselves, often view the reality of faith through a secularised lens of modern media.”

Recalling the visit of Pope Francis last August and the Taoiseach’s address in Dublin Castle, Mr Varadkar had noted that 21st century Ireland is a very different place than it was in the past.

He reminded us, the Archbishop said, that “there are more and more people [in Ireland] … who are comfortable in declaring that they subscribe to no organised religion”.

The Taoiseach had expressed the belief “that the time has now come for us to build a new relationship between Church and State in Ireland – a new covenant for the 21st century.” He spoke about an Ireland “in which religion is no longer at the centre of our society, but in which it still has an important place”.

However, Archbishop Martin regretted that so far no progress has been made by the government in developing the Taoiseach’s idea of a covenant.

“The demands of addressing the challenges of Brexit have justifiably taken up the time of politicians. This does not mean that this dialogue is not important not just for the interests of churches and government, but rather for the good of Irish society,” he said.

He also suggested that such a dialogue would involve a change in the attitude of our churches.

“I do not believe that people have a true sense of the crisis of faith that exists in Ireland. Yes, there are many residual elements of faith in our society and they are deep-rooted. These elements, however, are weakened with the passage of each generation.”

Elsewhere in his Limerick talk, Archbishop Martin said one of his fears about the future of the Church in Ireland is that those who fear change “will seek to find comfort zones where they can feel the support of the like-minded and not open themselves to the challenge of change.

“They can build firewalls between their belief and the world in which they live. They can take refuge in what Pope Francis calls ‘an auto-referential Church’.”

He added that hiding fearfully in what can appear to be tradition is “a great temptation” but not necessarily the message of Jesus Christ.

“In some cases, the fear of change can go further and be exploited into an ideology that actually distorts the message of Jesus,” he warned.

The Archbishop of Dublin warned that “Constantly repeating truths can in itself be a sign of fearfulness and a retreat from realities.”

This, he said, is the problem with “cultural warriors of certainty” who focus on one aspect of the truth and affirm a certainty in a way that comes from human assertion and from within a personally defined safe space.

“These people can become a source of division and partiality and polarization and can in their own way manipulate Church leadership into a certain sympathy with them and into taking wrong decisions,” Dr Martin warned.