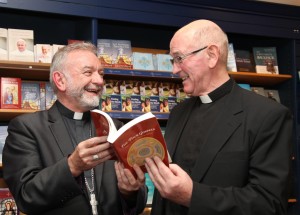 Archbishop Kieran O’Reilly and Fr Maurice Hogan SSC at the launch of ‘The Four Gospels: Following in the Footsteps of Jesus’. Pic John Mc Elroy.

The ministry of the word of God has grown and developed in the Church throughout the world since the promulgation of Dei Verbum at the Second Vatican Council, the Archbishop of Cashel & Emly said on Wednesday evening as he launched a new book on the Gospels.

‘The Four Gospels: Following in the Footsteps of Jesus’ was written by Fr Maurice Hogan, Director of World Missions Ireland and it is published by Veritas.

It has been described as “ideal for Christians who wish to learn more about their faith, or those who may have turned away from Christianity in the past and are now ready to return”.

Launching the new book, Archbishop Kieran O’Reilly said Fr Hogan, a former Professor of Sacred Scripture at St Patrick’s College Maynooth, was keen to underline that the book is a companion text – “it does not take the place of the scriptures”.

In his address, the Archbishop said one of the challenges for Catholics is to make the message of Jesus Christ relevant in our times. “We are asked to bring to others the person of Jesus, to invite others to share in the joy of the gospel and the central message of Pope Francis,” he said.

Through Dei Verbum there was a revival of interest in the Word of God in the Church, Dr O’Reilly said and added that many will remember the days when the Bible was just “a very elaborate book at home into which births and the deaths were recorded. It was hardly opened”.

He said the Second Vatican Council had a huge influence, first by renewing interest in the life of the Church itself and in theological reflection and the study of sacred scripture.

“In the past 50 years, the ministry of the word of God has grown and developed in the Church throughout the world and there has, in many places, been a new Pentecost for the Word of God.”

The Archbishop paid tribute to Fr Maurice Hogan’s teaching, writing and above all as a missionary priest.

He also highlighted Fr Hogan’s role as professor of scripture at St Patrick’s College Maynooth and as a member of the Pontifical Biblical Commission.

“That particular Commission produced some extraordinary documents in the life of the Church. Many of them have gone under the radar but they are very significant. The work of that Commission really deserves to be better known and probably will be in time,” the Archbishop commented.

He recalled the exhortation produced after the 2008 synod of bishops, Verbum Domini, specifically Article 72.

In it, Pope Benedict said the synod fathers expressed the hope for the flowering of “a new season for greater love of scared scripture on the part of every member of the people of God so that their prayerful and faithful reading of the Bible will deepen their personal relationships with Jesus.”

It continued, “Let us renew our efforts to understand equally the word which God has given to his Church and thus we can aim for that high standard of ordinary Christian living … at the beginning of the third Christian millennium which provides constant nourishment and attentive hearing of the Word of God.”

“That was a huge objective that was set out by that particular synod. I would suggest that Maurice has attempted to do that exactly as the synod asked,” he stated.

“The synod called for a particular pastoral commitment to emphasising the centrality of the Word of God in the Churches and recommended a greater biblical apostolate – not alongside other forms of pastoral work – but as a means of letting the Bible inspire all pastoral work.” 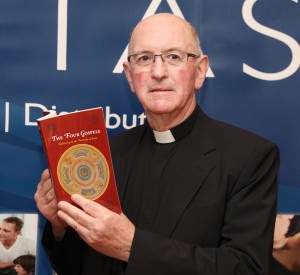 He added that Fr Hogan had in fact taken up that task of being “pastorally relevant”.

In his address, Fr Hogan said Pope Francis in his Apostolic Exhortation, ‘The Joy of the Gospel’ calls for an evangelisation based on the Word of God, that is listened to, meditated upon, lived, celebrated and witnessed to.

“Each one of us is asked to leave our comfort zones and reach out to others to spread the joy of the Gospel. But in order to evangelise, we need first to be evangelised ourselves – that is we need to have a relationship with Jesus that is personal and ongoing, especially through praying the Word of God.”

He described the Gospel of Mark as the ideal introduction to the life and activity of Jesus.

The Gospel of Matthew focuses on the importance of communal Christian living.

The Gospel of Luke demonstrates how the Good News of Jesus Christ can be proclaimed.

Finally, the Gospel of John is suitable for those who wish to contemplate the Christian life in its deepest unity of faith, hope and love.

“In the four Gospels we have four ‘manuals’ for the four essential dimensions of authentic Christian discipleship. They fulfil the need to explain in depth both to oneself and to others what the Christian faith is about and how it is solidly founded.”

He explained that the Gospel of Mark introduces us to the activity of Jesus. It is centred on the person of Jesus, on what he does rather than what he says.

Fr Hogan added that the Gospel of Mark serves to remind us that Christianity is not a theory, a myth, a utopia or an ideology but is the result of an encounter with the person of Jesus that gives life a new horizon and a decisive direction.

The Columban missionary highlighted that the Gospel of Luke serves as a manual for missionaries, the third dimension of Christian discipleship.

Fr Maurice Hogan is a member of the Missionary Society of St Columban. Ordained in 1965, he has served as a missionary in Japan and more recently in Hong Kong. He was Professor of Sacred Scripture at St Patrick’s College, Maynooth, and a former member of the Pontifical Biblical Commission (1996-2007). He is presently Director of World Missions Ireland (Pontifical Mission Societies).