Archbishop ordains Passionist to the diaconate 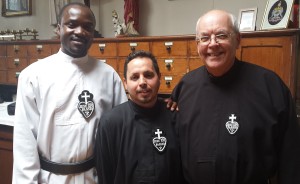 The Christian must never identify himself or herself with any establishment or power group or personal comfort zone, Archbishop Diarmuid Martin said on Saturday.

In his homily at a diaconate ordination Mass at the Passionist monastery in Mount Argus, the Archbishop said one of the particular themes Pope Francis stresses is that the call to be Christians begins on the periphery.

The Pope’s call to the periphery “is not simply an appeal for us to go out and help the less fortunate,” the Archbishop said.

He said the Pope stresses that we can only really understand the Christian message if we first go out and identify ourselves with those who do not have what we have, whether it be because they are isolated and abandoned, because they are hungry or homeless, because their faith is confused and full of doubts.

Speaking at the ordination ceremony of Frank Trias, CP, as a deacon, Archbishop Martin said we learn more through identifying ourselves with those on the periphery than we do from closing ourselves within our own certainties.

“That is a challenging message and one which makes many feel uneasy. It is easier to feel certain than to feel challenged,” he said.

Last September, Frank Trias made his perpetual profession of vows at St Mungo’s Church, Glasgow, where he used to be a parishioner before he joined the Passionist Order in 2009.

After his novitiate at Tobar Mhuire, Crossgar, he studied philosophy at Allen Hall (the seminary of the Diocese of Westminster) and he is now in his third year of theology at Heythrop College, University of London.

Frank’s family and friends in Glasgow were able to join the ordination service live on Saturday by the Churchservices.tv (CSTV) live stream and a recording of the ceremony is available on http://churchservices.tv/mountargus/recorded/BFJr1yQ for replay or download.

Elsewhere in his homily, the Archbishop of Dublin said a challenge for Catholics today is “to examine our own consciences on what kind of Church we are: a Church of those who comfortably feel that we belong to a community of the saved – a sort of safe community – or one that is open and welcoming to those who are seeking and doubting and who today would like to see Jesus.”

Addressing , Frank Trias, the Archbishop said a deacon is called to witness to a particular and essential dimension of the Church, that of being servant.

“The characteristic of being a servant must become a dominant characteristic in your life,” he said and warned that whenever any ministry in the Church loses that characteristic of service, then it can “so quickly degenerate into the opposite to ministry, to the temptation towards self-centeredness, towards using ministry and using others really to satisfy oneself, and thus to a betrayal of sacred authority which is exercised then not as ecclesial service, but in one’s own interest.”