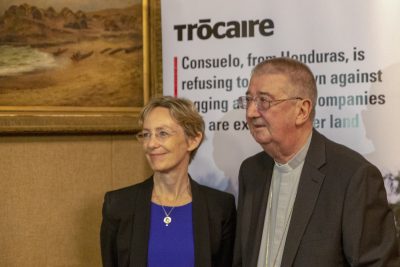 Archbishop Diarmuid Martin of Dublin began and ended his Trócaire lecture in Maynooth on Tuesday evening with a tribute to the those killed in the Ethiopian Airlines crash on Sunday evening.

Ethiopian Airlines Flight ET 302 crashed shortly after take-off, killing all 157 people on board. The passengers hailed from at least 30 countries, and many of them were aid workers with humanitarian organisations including the UN.

At the opening of his address for the annual Trócaire Lecture on the theme ‘At the Service of Justice and Peace’ in St Patrick’s College Maynooth, Archbishop Martin referred to the tragic loss of life, describing the Ethiopian flight as “in many ways, an aid workers’ flight.”

He said it was striking to see so many from aid agencies who had lost their life, including one from Ireland.

The dead included at least 32 Kenyans, 18 Canadians, 9 from Ethiopia and 9 from France, 8 each from the United States, China and Italy and 7 from Britain.

Irish engineer Micheál Ryan was among the seven from the UN’s World Food Programme (WFP). The 39-year-old had recently relocated to Rome to work at the WFP headquarters. He was a father of two.

At the conclusion of questions following his address, Dr Martin said, “Those people who were killed in the air crash … are the real heroes.”

Setting out the theme of his talk, the Primate of Ireland said he wanted to present some personal reflections, arising from his own experience, on the nature of Catholic social teaching, on its evolution in recent times and on how it can and should engage with the overall societal reflection on issues of justice and peace in an ever-changing world.

He said the social teaching of the Church must be in touch with reality. He stressed that it was not an ideology; nor was it a political or economic platform.

“The Gospels do not provide ready-made answers to the ongoing challenges of a complex world. To affirm otherwise would be fundamentalism. The Gospel message must be mediated within an ethical framework and become a challenge to people of good will to respond.”

Archbishop Martin recalled how in 1987 he found himself in a leadership position in the then Pontifical Council for Justice and Peace, which he said was one of the most interesting offices of the Holy See.

He paid tribute to Cardinal Roger Etchegaray whom he worked for and from whom he had learned much about the work of the Pontifical Council but also about being a priest and bishop. 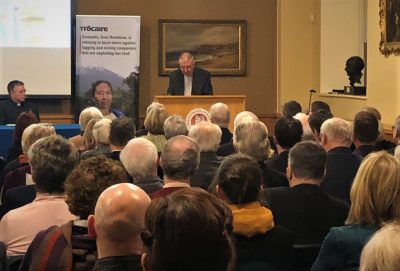 Working at the Vatican, he said, was “an unusual experience” and he had met some of the most intelligent, committed and enlightened men and women dedicated to the service of the Church.

“Most of the staff at Justice and Peace were highly qualified laypersons and the Council could draw on expertise from Church experts, lay and clerical, around the world.”

However, at the Vatican, he also saw the “darker and sadder side of Church life particularly that culture of careerism and nastiness”.

Recalling his work at the pontifical council, he said he found it interesting to look back now at the important Church documents the council published on what were the important questions at the time concerning justice issues. These included documents on international debt, homelessness, racism, land reform in developing countries, financial markets, international trade, and the trade in small arms.

The office was also responsible for drawing up ideas for the Pope’s messages for the World Day of Peace. Already in 1990, the Message was Peace with God the Creator, Peace with all of Creation, one of the Holy See’s first documents to deal with the environment.

He asked why the questions the council was asking in the 1990s are still the challenging questions today.

Though progress has been made, that progress was unequal and, in some cases, a sustained period of progress had been followed by long-term failure.

“Some African leaders who were hailed as the heroes of the international community have over the years reverted into dubious practice. There is a renewed populist politics in Latin America.”

The 2000 Millennium Development Goals were commitments that were realised only in part.

The neo-liberalism that appeared to have failed had given rise to equally damaging neo-populism.

He recalled his meeting with Vladimir Petrowsky, a former Soviet diplomat and First Deputy Foreign Minister who had been the Soviet negotiator on most of the important disarmament agreements such the Nuclear Non-Proliferation Treaty, the test ban treaties and follow-up treaties.

“He said to me, ‘these agreements were cold war agreements and that is now their weakness. They are in danger of crumbling. There is a need to re-examine the entire landscape of disarmament agreements in a changing and more dangerous world, but there is absolutely no willingness to do so’.”

Petrowsky stressed that this was not just a political challenge but also, fundamentally, a moral challenge for the international community.

“In these very days, we see how right Petrowsky was and how these disarmament agreements are beginning to disintegrate and the possibility of an arms race and even a nuclear arms race is becoming a real possibility,” Archbishop Martin warned.

He stressed that technical arrangements, no matter how important, will never survive in the absence of a moral consensus. 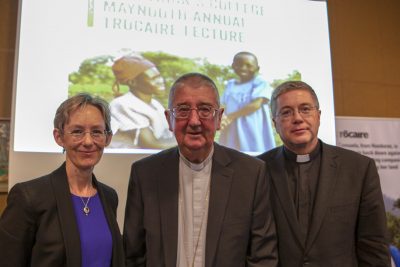 One of the encouraging new factors emerging in today’s world was international public opinion, he suggested. It had played a part in the shift in attitudes on landmines.

“It is important to remember how public opinion was an influencing factor in the fight against slavery, against child labour and today against human trafficking. Perhaps the most significant example in our times has been the change in attitude to protection of the environment and climate justice. International public opinion has reached down into local communities and governments are being driven by their own citizens to take up more enlightened positions. We see this week how even schoolchildren are setting the pace.”

Organizations like Trócaire, Archbishop Martin said, can be to the forefront in establishing and sustaining international network campaigns which influence national and international public opinion and show how ethical concerns belong to the real world and that politics and pragmatism can be forced to listen.

“It is worth noting that it was forerunners who rose above the prejudice of their own communities, who led people to the Northern Ireland peace process and who showed that peace was possible.  The current deadlock says something about the state of politics in Ireland.”

“The aim must be to encourage countries to address holistically the human and economic dimensions of development and urgently establish the challenge of governance in favour of the people, which is part of a culture that embraces sustainable peace.”

On the issue of migration, he said it will always be an intrinsic dimension of a global economy and society.

“It is also about people who have nothing, who are exploited in the roots of their humanity. The way we treat migrants and especially refugees is a barometer of our humanity.”