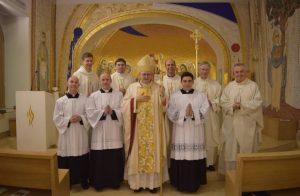 Archbishop Diarmuid Martin of Dublin will today ordain three men as deacons in the Church of St Alphonsus Liguori in Rome.

Two of the deacons are destined for priesthood in the archdiocese of Dublin while the third will serve in the diocese of Clogher.

Seán Mulligan (46) is a native of Tydavnet parish in Co. Monaghan and a seminarian at Rome’s Pontifical Irish College.

All three were admitted to Candidacy for ordination to the diaconate and priesthood by Cardinal James Harvey, Archpriest of the Basilica of Saint Paul Outside the Walls, at a Mass in the Irish College on 22 February 2017.

Archbishop Martin will be assisted in this morning’s ceremony by the diocesan administrator of the Diocese of Clogher, Mgr Joseph McGuinness and several other priests of the diocese.

Deacon Sean Mulligan and the two deacons from Dublin will be ordained to the priesthood in a year’s time.

Ordination to the diaconate is the final stage before ordination to priesthood. The Sacrament of Orders has three degrees: (i) deacon, (ii) priest and (iii) bishop.

It is the task of deacons to assist the bishop and priests in the celebration of the Eucharist, in the distribution of Holy Communion, in assisting at and blessing marriages, in the proclamation of the Gospel and preaching, in presiding over funerals, and in dedicating themselves to the various ministries of charity.

After working for three years in the concrete business, he took up a post with Monaghan GAA, coaching primary school children in the north Monaghan area.

It was during this period that he felt a renewed inner desire to serve God through the priesthood, but he chose instead to pursue a career in intellectual disability nursing through DKIT and St Mary’s Residential Centre, Drumcar, Co. Louth.

He spent five years working as a staff nurse in St Mary’s before finally answering the call to priesthood, entering formal studies for the Diocese of Clogher in 2007.

During his time as a seminarian, he undertook a pastoral year in Dublin, working alongside Fr Peter McVerry SJ and the homeless, those with drug and alcohol addictions, and with prisoners.

Following this, he moved to the Pontifical Irish College in Rome to study for a degree in theology at the Angelicum University.

He is a lifelong member of the Pioneer Total Abstinence Association.