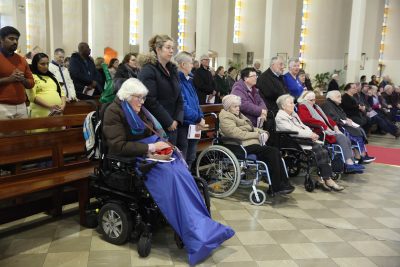 Some of the congregation at Mass on Sunday in the Church of the Guardian Angels, Blackrock to mark World Day of the Sick. Pic John Mc Elroy.

Ireland’s “extraordinary doctors, nurses and carers so often feel let down” by a health system in which “sick children and the elderly are left waiting and exasperated,” Archbishop Diarmuid Martin has said.

On World Day of the Sick, the Archbishop of Dublin celebrated Mass and the blessing of the sick at the Church of the Guardian Angels, Newtownpark Avenue, Blackrock.

In his homily, he said the sick always had a special place in the mission of Jesus Christ.

“Everywhere Jesus went he healed the sick and lightened the burdens that prevented men and women from realising their dignity.”

Noting that the name of the Church where the liturgy was taking place was that of the Guardian Angels, the Archbishop said that in the Christian tradition the guardian angel tells us something about God.

“Our God is someone who cares for each individual; and in good times and in the worst of times in our lives God provides a mysterious presence by our side to accompany and to protect us.”

The Church and believers are called also “to be guardian angels for those who suffer silently and are troubled”.

Elsewhere, Archbishop Martin regretted that “despite the progress of medical science, many of those who are sick suffer from a deep loneliness and an abandonment – a sense of being rejected and forgotten, that society simply passes them by and leaves them on their own”.

He highlighted that the Church had come together as a community to celebrate World Day of the Sick and to “welcome our sick brothers and sisters as privileged members of our community”.

The Archbishop delivered a strong message to politicians noting that “we live in an Ireland marked by a strange incongruence; we live an era of astonishing progress in medical science” and have among us “doctors, nurses and carers of extraordinary quality and dedication” yet “so many aspects of our healthcare system are scandalous”.

He expressed the hope that the many commentaries, “the many promises we’ve heard in these election days won’t remain just empty words” and he stressed “we have an obligation to keep our leaders to their words”.

Separately, as election results began to emerge on Sunday evening, Archbishop Eamon Martin of Armagh tweeted, “Thanks to all those who stood for election for their willingness to provide leadership and service. Congratulations to those elected. May they work with common purpose for all sections of society, especially the most marginalised.”

In a second tweet, the Archbishop prayed for the country’s politicians and quoted from Pope Francis who said, “Everyone who assumes the responsibility of governing should ask themselves: Do I love my people, so that I may better serve them? Am I humble enough to hear the opinions of others so as to choose the best way of governing?”