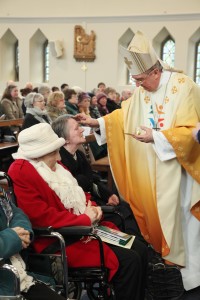 Archbishop Diarmuid Martin anointing a lady during the World Day of the Sick Mass in the Church of Our Lady Queen of Peace Merrion Road, Dublin. Pic John Mc Elroy.

Archbishop Diarmuid Martin has decried the recent gangland violence that saw a man killed and two others injured at the Regency Hotel last Friday.

In his address for World Day of the Sick at a conference in Dublin on Saturday, the Archbishop said he could not “overlook the extraordinary examples of violence which have marked our city again in recent days”.

Referring to the killing of Kenneth O’Brien, whose dismembered torso was found dumped in a suitcase over a fortnight ago from the Grand Canal, near Ardclough, Co Kildare, the Archbishop said, “Dismembering bodies as some sort of warning is not sign of prestige or power but of despicable inhumanity.”

He continued, “Premediated shooting in public places even in the presence of terrified children and innocent bystanders only degrades the humanity of those who do it.”

“They fail to see that such inhumanity inevitably rebounds on its own perpetrators and never leaves them with the security they seek.”

The Church leader appealed to anyone who has influence to ensure that more young men are not dragged into such dehumanising violence, “fostered by despicable and cynical exploiters who feel they can treat life lightly”.

The Archbishop made his comments as he was discussing respect for life as a constant concern for those who are weakest to ensure that everyone can have access to the highest level of personal realisation possible within a climate of care and love.

He told over 250 delegates who attended the conference in Dublin that the message of Lourdes is a message about the noblest dimensions of human service,  love, care and compassion.

“Noble behaviour ennobles those who undertake it. Such behaviour is what builds up society and a vision of community and participation and care. Jesus Christ is the revelation of the God whose name is mercy. If we believe in him we will witness to his mercy in the way we live,” he said.