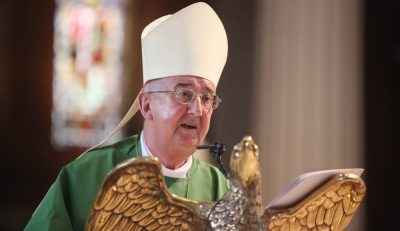 Archbishop Diarmuid Martin of Dublin has roundly condemned the violence and death perpetrated by drug cartels.

In a statement on Monday, the Archbishop said this violence has taken on “an unprecedented level of depravity with shootings taking place unscrupulously near schools and shopping centres”.

This had left families terrified while children had witnessed brutality that would leave scars on their lives for years.

Dr Martin questioned why those responsible for these recent gun attacks “think they have a mandate to carry out such shameful violence simply in order to secure their own wealth”.

He said those who perpetrate and sponsor such violence merit nothing but “rejection and disdain. They belong behind bars and their business of death must be undermined and destroyed.”

He appealed to anyone with information about this “sickening underworld” to have the courage and the decency to come forward in the interest of all.

He also appealed to civil and community leaders to show a united and uncompromising response.

“I urge people to approach the Gardaí either directly or indirectly to provide any information which can help remove this malignance from our streets.”

He sent a message to gangland criminals that their showy funerals have no place in a Catholic church in Dublin.

“Where it can be ascertained that individuals hold direct responsibility in this traffic in evil they will no longer be allowed to exploit religious services in the Archdiocese of Dublin to enhance their image,” he warned.

The Archbishop’s comments follow the killing of six people since the start of the year in gun attacks.

On Saturday a man was shot and injured in broad daylight outside a Lidl supermarket in west Dublin in front of onlookers and shoppers.

The man’s son was left paralysed after suffering life-altering injuries when a gunman shot him while he was sitting in his van on Blakestown Road, west Dublin in March.

In May Jordan Davis was shot dead in Darndale, beside a school and a church, just 17 hours after his friend Sean Little was found shot dead on a back road in north County Dublin.

Last Tuesday, Hamid Sanambar was shot dead during a wake for Sean Little at his Dublin home.

Archbishop Martin issued his statement on the feast of St Kevin, co patron of the archdiocese of Dublin.

In his homily at the Pro Cathedral on Monday, Dr Martin noted that both St Kevin and St Lawrence O’Toole, even though they lived centuries apart, received their formation at the Monastery of Glendalough.

Glendalough is not just the ruins of a monastery of the past, he said.

“Glendalough was a significant place for renewal of the Church and a place of reflection on the role of  faith in the formation of the social order and of a peaceful society. The history of Glendalough is not without its relevance for our time.”

After ordination, St Kevin had established a hermitage in Glendalough and lived there for many years as a hermit with “an extraordinary closeness to nature”.

Glendalough grew into a place of learning and a place for the formation of the clergy, a place of prayer and a place of spiritual renewal where people came to find new depth in their lives.

In his homily Archbishop Martin said, “We must also recognise how the self-centred culture of the way many of us live has actually damaged the original beauty of nature and creation. The care of the environment depends on a spiritual culture.”

He added that a culture without authentic spirituality will damage both humankind and the environment.

“Faith is not something that removes us from the realities of the world. Christian spirituality is not an added extra, but a factor of integration in our lives.”

He said Christian believers are called today, as in any time in the past, to be active in the process of shaping the future of Irish culture.

Admitting that this is not easy, he said the Church is called to be present within a society in which many no longer feel a warmth towards it. “There are elements of what constitute our contemporary institutions that are past their sell-by-dates and many appear to be alienating.”

“Institution can entrap. They are reformed not by tweaking their image or their boundaries, but by restoring their heart and authenticity and bond with Jesus Christ.”