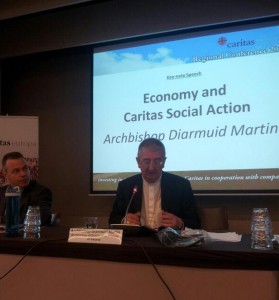 Any form of globalisation that breeds exclusion, marginalisation, instability, indifference and crass inequality does not have the right to call itself global, Archbishop Diarmuid Martin of Dublin has said.

In his address to Caritas Europa’s Regional Conference in Soesterberg in the Netherlands on Thursday, he said globalisation must be the synonym of inclusive.

“Some of the changes that are taking place in our era of economic globalisation make it more and more difficult to identify the processes for guiding or governing social and corporate responsibility,” he told conference delegates.

He added that the complex balance of the public and the private sectors, the dominance of economic values above all others, the inadequacy of our international structures, make the governance of globalisation difficult.

He commented that the rules of trade relations are important and these rules are there to defend the more vulnerable and to restrain any tendency towards arrogance of those who are more powerful.

Rules are necessary but they can remain a naked skeleton unless they are covered in the flesh and blood of solidarity, the Archbishop said.

In his address, titled ‘Economy and Caritas Social Action’, Archbishop Martin described himself as “a strong believer in the importance of the free market.”

“Overall it has produced a system for the supply of goods and services which has worked better than any other system.”

But, he warned, the market is not a totally rational instrument. “Regulation and transparency are a necessary part of a market equation,” though there had been a fear that almost any external regulation would actually defeat the freedom which the market requires and thus be damaging.

According to the leader of the Church in Dublin, Church teaching is neither totally pro-market nor totally anti-market.

“The Church looks at an economy as to how it responds to the fundamental needs of people. An economy can kill, as Pope Francis stresses; an economy can be a fertile ground for building long standing support for the weakest.”

The challenge to constructing solidarity is that it must take place within the concrete realities of the world and it must try to identify the optimal management of various elements within that reality as times change.

This is the challenge Caritas faces in its dialogue with business as it tries to foster broad investment in human and social capital.

He explained that the aim of his address was to set out how in today’s globalised world there are a variety of actors and that we have to create new ways of interaction between all of them, new and old.

“No one can go it alone or feel that they alone can decide. We have to sustain new models and yet integrate them as global actors,” Archbishop Martin said.

These also include social entrepreneurship and the non-for-profit business model.

“I wanted to focus on how in this context Caritas can be involved with every sector of this complex reality, while retaining its own unique identity and contribution, which comes from the very notion of Christian charity, which is marked by gratuitousness.”

Caritas Europa’s Regional Conference is its highest governing body, where directors of national Caritas organisations all over Europe come together for an annual assembly.

In his address, the Archbishop said no one can go it alone or feel that they alone can decide. “We have to sustain new models and yet integrate them as global actors.”

He recognised that the salaries of those working in the humanitarian area are coming under increasing scrutiny in many countries. “The fact is that humanitarian activity is business,” he stated.

Acknowledging that market mechanisms find their place in many activities of development and humanitarian bodies, he said he was always struck by the way aid organisations rival each other with professional media publicity when an emergency emerges. “When an emergency breaks, the competition gets hot,” he added.

Acknowledging that the market is vulnerable to criticism, he said it was an important mechanism to ensure the efficient supply of goods and services. “The market delivery of social services can be an efficient manner of responding – if not always – to human needs,” he commented.

“In today’s world any shrinking from transparency will affect not just the image of a charitable organization or an NGO, but its very integrity.”

Surprisingly, he admitted that the term NGO is one he has never been happy about. “It tends to place government as the prime mover in all social activity. Rather than foster a real concept of subsidiarity, the term NGO somehow implies a tendency to look on everyone else as totally subsidiary and even subservient to government itself.”

While NGO’s will see themselves as being a more efficient deliverer of social programmes, governments may look on them rather as a cheaper way to deliver government funded programmes.

NGO’s can unwittingly become simply the privatised arm of government Governments outsource certain services through them. “This is not always without cost to the integrity of the specific vision and mandate of an NGO,” according to Dr Martin.

“For me it is important that Caritas should place itself not just as a better and more efficient vehicle for the delivery of public funding objectives, but rather as an organisation or family of organisations inspired by different – indeed a unique – vision of what is to be delivered and how.”

He noted that the Millennium Development Goals do not contain any special goal concerning employment and jobs.

“What is important is to develop a framework of labour in which the advancement of human capital is prioritised.

In many cases in our European countries, there are extremely high levels of youth unemployment. At times the statistics are distorted by the fact that many young people have emigrated in any case and no longer figure on the statistics of their own country.

The level of youth unemployment is thus de facto even higher that the official statistics.

In Ireland we have a very large number of highly qualified unemployed youth. Up to about 60% of our young emigrants in recent years have had university degrees.

Many families have gone to great lengths to educate their children according to what was the common wisdom, and sent their children to university: but they end up not getting employment.

In other countries forms of apprenticeship with business have been more successful in ensuring job training, and the investment in the future of young people has proven to be of advantage to them and to the economy in itself.

In this broad context of a globalized economy and interaction with governments, how do charities defend their own identity and ethos?

“Interaction between Caritas and business is an inevitable part of daily life. The question then arises: how far is a market driven economy really compatible with the vision of the Church inspired organization? Are there limits? Can the laws of competition somehow compromise what is basic in the Christian message: generosity, gratuitousness and solidarity?” he asked.

Archbishop Martin suggested that one of the challenges of the complex economy of our times is the interaction between government, business and civil society. “The distinction between public and private has become necessary blurred.”

He quoted Pope Emeritus Benedict XVI’s encyclical on hope in which he states that “while professional competence is a primary, fundamental requirement, it is not of itself sufficient. We are dealing with human beings, and human beings always need something more than technically proper care. They need humanity. They need heartfelt concern.”

“Those who work for the Church’s charitable organisations must be distinguished by the fact that they do not merely meet the needs of the moment, but they dedicate themselves to others with heartfelt concern, enabling them to experience the richness of their humanity.”

“Consequently, in addition to their necessary professional training, these charity workers need a ‘formation of the heart’: they need to be led to that encounter with God in Christ which awakens their love and opens their spirits to others.”