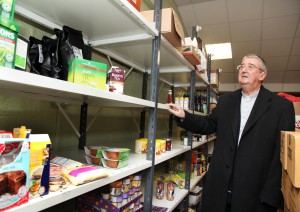 For the third year in a row, Archbishop Diarmuid Martin has asked the parishioners of Dublin to donate food to help stock food banks which provide for those struggling especially in the weeks before Christmas.

In 2013, the Archbishop launched the first ever Diocesan Food Appeal and he renewed that appeal last Christmas.

Crosscare, the social care agency of the Archdiocese of Dublin, operates seven Food Banks across the capital.

Demand for food, especially from families, has remained consistently high in recent years and the winter months are traditionally a time when supplies at the food banks run low.

According to Crosscare’s Food manager, Michael Mc Donagh, there were no sign of a falloff in demand for the service this year. Crosscare provides basic foodstuffs to those most in need, especially families with children.

“We would much rather be in a position where we are closing food banks,” Michael McDonagh commented, but demand has remained steady throughout this year with another 750 tonnes of food distributed so far.

In a letter to priests and parishes on Tuesday Archbishop Martin asked, “As this Jubilee Year of Mercy begins, I am asking you to once again help those in need in our Diocese by assisting in the collection of vital foodstuffs for the Crosscare Food Banks.”

“These Food Banks give food directly to individuals and families in need through local community food banks and also to over 70 other charities in Dublin who are working with those most in need.”

He has asked parishioners to bring non-perishable food items to Masses in their local parish church on the weekends of 5th/6th and 12th/13th of December.