Home > News > Tribute to Mercy Sisters as they leave Ballyhaunis

Tribute to Mercy Sisters as they leave Ballyhaunis 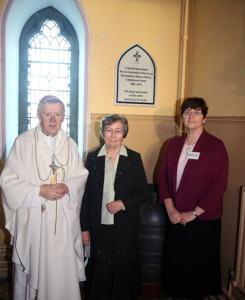 The history of the Sisters of Mercy in Ballyhaunis is “a remarkable story against a background of poverty and disillusionment” Archbishop Michael Neary said on Sunday in a tribute to the Order’s contribution to education in the town as the Sisters prepared to leave after 117 years.

In his homily, the Archbishop said the daughters of Catherine McAuley had built up the school in Ballyhaunis and showed generations of students how a dream can become a reality from the arrival of the first four sisters from Westport on 27 August 1898.

The Sisters taught for the first month in a small building and took responsibility for the education of girls in the existing National School, known as St Mary’s, which was located at the present Scoil Iosa.

Elsewhere in his homily, the Archbishop said that in some quarters today “it has become fashionable to criticise people in consecrated life” but he added that “The faults and sad betrayals of a few should not be allowed to obscure the greatness of the vision and the indisputable greatness of so many working visionaries.”

“History I am convinced will regard their work as crucial,” Dr Neary stated and added, “When the history of the Mercy Sisters comes to be written I feel confident that the enormous good done by them and done quietly, secretly, unselfishly, generously and constantly, by so many devoted and dedicated sisters will be highlighted.”

Referring to the context in which the Sisters had built up education in Ballyhaunis, Archbishop said the “steady sinister haemorrhage of emigration was bleeding the West dry. Many of those leaving were almost without education and frighteningly vulnerable as a result. Above all there was little or no money.”

“It was a situation which might have broken smaller people, but the Sisters of Mercy responded to the challenge with a physical, intellectual and above all, spiritual toughness which produced results both for those who emigrated and those who remained at home.”

“These daughters of Catherine McAuley built up the school and showed generations of students how a dream can become a reality. They showed that the price of what we want need not break us if we have faith in the God who has already paid the price of all our betrayals and all our failures. They taught in the classroom, day in and day out. More importantly they taught in the living example of their lives.”

He said the Mercy Sisters’ contribution through the years would be predominantly remembered in terms of education but it also extended into social services and social work, their care for all sectors of the community and particularly for the poor and needy.

“Today we live in a culture which holds wealth and worldly attainment in remarkable respect. Gradually, indeed over the last 30 years or so, our society has ceased to pay anything but lip-service to the ancient and socially crucial virtues of love, honour and self-sacrifice. The humanity of the charism of the Sisters of Mercy is God-given.”

“Our celebration is tinged with a certain sadness because we say farewell to the Sisters who were at the very heartbeat of this community over these years.”

He highlighted that the preparation for the celebration of the Jubilee Year of Mercy runs concurrently with the Year dedicated to the Consecrated Life.

“This by a coincidence or should I say more accurately by a divine plan happens at the same time of the Silver Jubilee of the Church’s recognition of Catherine McAulay’s holiness of life.”

He recalled how Pope Francis in his letter to Consecrated persons for the Year of Consecrated Life quoted Pope John Paul II: “you not only have a great history to remember and recount, but also a great history still to be accomplished. Look to the future where the spirit is sending you in order to do even greater things”.

“The story of the Sisters of Mercy describes the high ideals and creative ways they were implemented, the difficulties faced and the creative manner in which these difficulties were overcome.”

“It is a story of love and confidence, story of generosity and faithfulness, a story that reflects the mercy of God in various ways and far-flung places.”

“Through the Gospel which they lived, their feminine genius, fidelity and determination, the Sisters of Mercy pioneered the vital aspect of the social fabric of Ireland through the years.”

“In my foreword to Canon Kieran Waldron’s book ‘Out of the Shadows’ which dealt with emerging Secondary Schools in the Archdiocese of Tuam, I refer to ‘A Story of Visionary Pioneers’.”

“These Mercy Sisters were people who put everything on the line in their determination to make hope a concrete thing and to make dreams come true. This is the story of the Sisters of Mercy here in Ballyhaunis.”