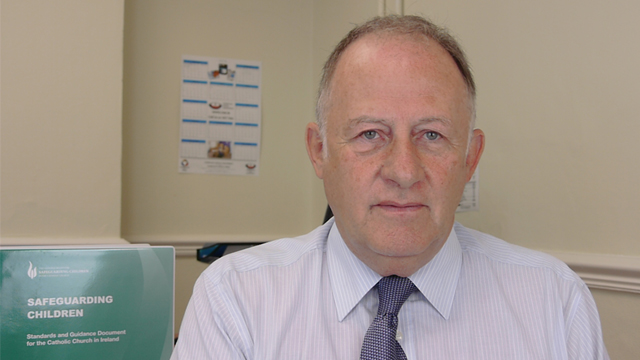 Ian Elliott, former CEO of the National Board for Safeguarding Children in the Catholic Church in Ireland (NBSCCCI).

Archbishop Diarmuid Martin of Dublin has described the work done by the Church’s safeguarding watchdog as “vital”.

The Archbishop endorsed the National Board for Safeguarding Children in the Catholic Church’s work on Wednesday when he was asked about recent criticisms made by the former Chief Executive of the Board, Ian Elliot.

In an article published in the January issue of The Furrow, Mr Elliott called for “investment in and support for a viable National Board at the centre of the Church” by its sponsoring bodies, who are the Bishops, the Conference of Religious of Ireland and the Irish Missionary Union.

He accused the three of starving the NBSCCCI of support and limiting its role “by covert means.”

Mr Elliott, who headed up the National Board for six years, said the budget for the National Board had been reduced, year on year, for the last four years. “From a staffing perspective, it has less resources than some dioceses,” he observed.

The article, which is titled, ‘A Single Safeguarding Strategy: Learning from Past Mistakes’, warns that siting investment within individual Church authorities, and starving the National Board of the support it requires, runs “the risk of a lapse back to poor risk management or possibly worse.”

“I see no justification for it other than a desire to limit the role of the Board by covert means,” he said.

Speaking in Dublin ahead of his address to a conference on migration, Archbishop Martin said the audits undertaken by the National Board were now financed by individual dioceses and that the bill for the costs was prepared for the NBSCCCI.

A spokesman for the NBSCCCI told CatholicIreland.net that if the Board became concerned that it did not have sufficient resources to carry out its work “we would take it up with the church directly and ensure that we were correctly funded.”

In January, the National Board announced it had appointed Teresa Devlin as the new Chief Executive to replace Ian Elliot who retired last June.

According to the NBSCCCI spokesman, Ms Devlin has sought “an early meeting between the Board and the sponsoring bodies … at which the development of Board resources” would be discussed.

The Archbishop told CatholicIreland.net that the reduction in the National Board’s funding affected just one sector of its work.

“The training costs and the costs of the reviews are totally separate,” he said and added he hoped that “whatever difficulties there are that they can be resolved”.

Referring to change in culture and context for the National Board since he was first appointed, Mr Elliott said in his article that safeguarding services in the Church had seen a proliferation of new resources and skilled and experienced individuals have been recruited from statutory children’s services to new posts within dioceses and other Church authorities.

“Although this investment is to be welcomed, it is concerning that a similar level of commitment has not been shown to the National Board itself,” he commented.

Acknowledging the “great progress” that had been made in addressing the problem of inadequate safeguarding services within the Church in Ireland over the previous six years, Ian Elliot said he believed that safeguarding the vulnerable child within Church is of critical and fundamental importance not only to the child, but to the institution itself.

However, he warned that the existence of policies and procedures in themselves are no guarantee of compliance.

“It is not enough to agree to adhere to a certain standard, you have to be willing to be examined to ensure that your practice meets that standard,” he said.