Home > News > Archbishop Martin hits back at critics of Pope

Archbishop Martin hits back at critics of Pope 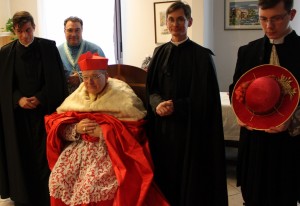 God’s people must not be intolerant and exclusivist but welcoming and diverse Archbishop Diarmuid Martin of Dublin has said.

At a Mass to rededicate the newly refurbished St Laurence’s church on the Dublin Institute of Technology’s new campus in Grangegorman, Archbishop Martin said a church building, like the Church itself, is never a closed or isolated building or community.

“A Church which becomes a comfort zone for the like-minded ceases to be truly the Church of Jesus Christ,” he warned.

Elsewhere in his homily, the Primate of Ireland underlined that an authoritarian Church “needs to recognise that faith comes not from imposition but from attraction.”

The Archbishop appeared to strike back at conservative critics of Pope Francis’ leadership of the church and the open discussions held at the recent Synod of bishops in the Vatican.

His comments on Tuesday follow criticisms of the Pope by Cardinal Raymond Leo Burke who attacked the Pontiff’s leadership publicly in a media interview claiming the “Church is like a ship without a rudder”.

Speaking to the Spanish Catholic weekly ‘Vida Nueva’, Cardinal Burke who currently heads up the Vatican’s highest court, the Supreme Apostolic Signatura, but is expected to be demoted soon, appeared to call for more certainty and to personally criticise the Pope.

“Now, it is more important than ever to examine our faith, have a healthy spiritual leader and give powerful witness to the faith,” the Cardinal said.

On Tuesday, Archbishop Martin described himself as “quite surprised” by the remarks of some commentators within Church circles about the recent Synod.

He warned that a longing for certainties may spring from personal uncertainty rather than strong faith.

The Archbishop, who attended the two-week long Synod on behalf of the Irish Church, rebuked those making accusations of confusion where confusion did not exist and he accused them of actually fomenting confusion.

“A strong – and indeed orthodox faith – is never afraid of discussion,” the Primate of Ireland said.

He recalled Pope Francis’ call at the Synod for open discussion on how the Church should reach out to those who are marginalised and hurt and wounded in their lives.

Archbishop Martin rejected suggestions that the Pope’s concern for people is “dogmatic relativism”, saying it was in fact “a sign of pastoral patience” which he denied was “the work of the evil one”.

He called for the development of a sense of pastoral patience and a path which seeks mutual understanding rather than setting barriers against thought.

In today’s world an understanding of the significance of the reality of faith – with its negative and positive connotations – is vital if we are to create a more respectful global society, he stated at the Dublin college.

He said there is no place more suited to this dialogue that “the university”, the place synonymous with free and open and tolerant and respectful interaction.

“My prayer as we rededicate this church is that it will be a sign for a future of dialogue at the service of truth and care and that this building which has been almost the sole bridge for decades between the hospital community and the local community will continue to be and flourish as a place of such dialogue.”

He continued, “The Lord’s house is never a place of exclusion but a space where the love of God revealed in Jesus Christ is experienced.”

Referring to the readings at the Mass, Dr Martin said the foreigner – those who were on the margins of society at that time and who have throughout history been the symbols of the marginalised – can find a place in the Lord’s house and provided they live a life of integrity and of love they can come and bring their offerings and their sacrifices to the table of the Lord.

Acknowledging that the Church in Ireland finds itself in a more pluralist environment, Archbishop Martin told those attending the Mass that DIT was a pluralist college and one which has a very wide ethnic, social and religious mix.

“My hope is that around this building there will emerge a focus for meeting; a space where people of different faiths can meet; a space where believers and non-believers can meet in a constructive way open to being building blocks of a common search for what is good and noble, of a respectful working and thinking together and of together serving.”

The path of respectful and honest dialogue between the Church and society – and between non-belief and the Church – is not easily undertaken, he underlined.

He said that in Ireland this path is marked by our own history, where relationships on each side have often been negative and unproductive.

“The Church community has its own difficulties in addressing change and uncertainty,” he admitted.