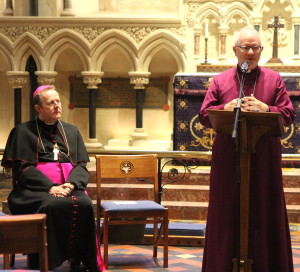 The leaders of the country’s two main Churches have said they support lifting the ban on gay men donating blood if there is no medical reason to retain it.

At the end of January, Minister for Health, Leo Varadkar, indicated that he favours a relaxation of the ban on gay and bisexual men donating blood. The ban was introduced in 1985, at the height of the HIV/AIDS crisis.

“It is very important that no group should be discriminated against being able to give organs or indeed to give blood,” Archbishop Martin said.

The Catholic Primate said that the actual details of lifting the ban was something that has to be evaluated by the health services because it was a medical matter.

“But as regards any of us giving blood, we are all asked questions about safety and I imagine that should apply to everyone equally,” Dr Martin commented.

Archbishop Clarke said the issue was a medical one. “If the medical question is resolved, I think we will accept the generosity of anyone.”

The FleshandBlood (FaB) campaign aims to mobilise churches to get their parishioners more actively involved in donating blood and organs to help those waiting for a transplant or in need of a blood transfusion.

It is the first cross-border partnership in Ireland between the Churches and the health services.

Currently there are 800 people awaiting an organ on the island of Ireland and every year nearly 100,000 transfusions take place.