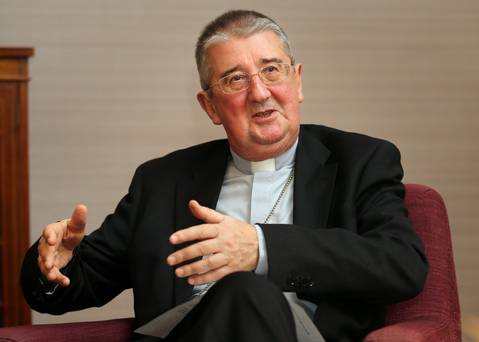 Rank and file Gardaí who daily carry out their duties professionally and in a dedicated manner have been defended by Archbishop Diarmuid Martin of Dublin as he warned that the “constant criticism” of the force was not good for Irish society.

In his address to the Institute of Public Administration on Thursday, titled ‘Good Governance, Culture and Ethics,’ the Archbishop called for confidence to be restored in law enforcement.

Acknowledging that there have been failings within an Garda Síochána, he said a culture of constant criticism of the police force was not good for society or for the economy or “for the mainstream of a force which is highly dedicated and highly professional.”

The Archbishop said the expressions of regret over the closure of Garda Stations was “a real expression of appreciation for the contribution the Gardaí make within our communities and the respect in which they are held.”

He also noted that the new globalised nature of the economy required new structures on an international level to combat irresponsible and criminal behaviour and he said this was “urgent”.

In a wide ranging address, the former Vatican diplomat said it was interesting that organised crime was one of the first groups to recognise the advantages of globalisation.

“I don’t just mean drug or weapons dealers, but also new forms of irresponsible speculation and dishonest behaviour within the business community,” he commented.

He added that an ethical framework was not just pretty words on a piece of paper or in a mission statement but is something that must be integral to the way people work and exercise their role in society.

Underlining that governments can fall prey to corruption, the Archbishop said that while smaller government may be more desirable than some of the past experiences of massive and unproductive government interference in society and the market, the lack of effective government is equally disastrous, just as inefficient government is.

Government is essential to guarantee the ethical and juridical framework within which the market can flourish and within which ethical market behaviour will be fostered, he suggested.

The Primate of Ireland said the most common form of corruption is inefficiency, “which robs people, especially the poorest and the most vulnerable of the quality services which are their democratic due and for which they pay anyway.”

On the other hand, transparency is an essential part of efficient governance.

The Primate of Ireland said there was a lack of personal responsibility in corporate governance which often resulted in resignations at lower levels and a culture of blaming someone else.

“I was stunned on the occasion of the scandals of child sexual abuse to encounter what I came to call the ‘baking the cake culture’,” he said.

This, he explained, led people to try and shift the blame elsewhere. “I only put in the sugar and he only put in the flour, but neither of us have any responsibility for the cake because we were not there when it was put into the oven.”

He said we are all responsible for the foreseeable consequences for our actions and for our omissions.

Archbishop Martin, who is president of the board of governors of the Mater Hospital in Dublin, also expressed concern at the pressure which cutbacks in healthcare combined with higher standards of medical care imposed on members of boards of governors, describing it as “unnerving.”

He suggested that boards of governors of voluntary organisations need training and support.

Elsewhere in his address, Archbishop Martin hit out at spin and warned that public opinion can be manipulated; “it can be emotional rather than rational.”

He claimed that spin is a huge business in Ireland and was rarely the friend of transparency but weakened trust and confidence in institutions.

The judgement of public opinion is a blunt tool, with very little space for subtle details.  This is especially true in situations in which a culture of spin begins to dominate, he said.

“You can win many battles with spin, but spin in the long run weakens victory of the real war which is about trust and confidence. When spin gets out of control, then it gets tied up in knots and people are left adrift not knowing where they stand, where the truth is to be found, and the confidence in institutions is weakened.”

“When that occurs in public institutions and in public life then the consequences of a failure in trust are serious. Spin is a huge business in Ireland and spin is rarely the friend of transparency.”

He also appeared to back the role of whistleblowers saying for public opinion to change there have to be forerunners.

“In the complex world of business and politics the art of the compromise is an essential part of the day- to-day ability to move forward.  But the level of compromise which becomes acceptable is determined by those who do not compromise.”

He said the Pontiff had achieved something that is the real dream of any CEO: “he has turned around the image of his office and of his organisation.  He has moved from an organisation which was uncertain about its way, bogged down with scandals and challenges.  Pope Francis has given many a new hope and a feeling that that there are reasons why believers can be proud of their Church.”

He reiterated his concern over youth unemployment and said there must be more room for apprenticeships and an involvement by business in generating employment opportunities for the young, as Germany and Switzerland had done successfully.