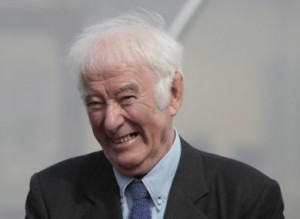 Archbishop Eamon Martin has described Seamus Heaney as a poet of compassion, a great teacher and a gentle man in every sense.

Extending his prayers to the family of the poet following his death on Friday, the Archbishop said, “We were all quietly ambushed by sadness at the announcement” of his death.

He said Ireland’s foremost poet, who was honoured on the world stage, was “always at heart a quiet Irish man who wrote our story without rhetoric.”

“In his work he observed ordinary country people going about their ordinary lives. His father, his mother, his aunts, his neighbours were Seamus’s quiet heroes as he became ours”, Dr Martin added.

In his tribute, he said Seamus Heaney had been anthologised for primary and secondary students for decades. “His poetry excavated the past and found coordinates for the present. He saw history as our story – the story of ordinary humankind.”

Archbishop Martin is a former president of St Columb’s College in Derry, where Seamus Heaney was a pupil.

In his tribute, the Church of Ireland Archbishop of Armagh, the Most Revd Dr Richard Clarke said he was “very saddened” to hear of the death of the poet, “particularly having enjoyed hearing him give a wonderful poetry reading along with Michael Longley only two weeks ago.”

He added, “By any standards, he was one of the greatest poets writing in the English language of our time.” The Primate described Seamus Heaney as a “man with a great generosity of spirit.”

“His poetry illuminated aspects of Irish life North and South which perhaps many of us would not have understood without his writing,” he said.

President Michael D Higgins said Heaney was touched by a “mark of genius” and praised his willingness to deal with human rights issues.

“The presence of Seamus was a warm one, full of humour, care and courtesy – a courtesy that enabled him to carry with such wry Northern Irish dignity so many well-deserved honours from all over the world”, President Higgins said in a statement.

He added, “His careful delving, translation and attention to the work of other poets in different languages and often in conditions of unfreedom, meant that he provided them with an audience of a global kind.”

Seamus Heaney died in hospital in Dublin on Friday morning, after a short illness. He is survived by his wife Marie and children Christopher, Michael and Catherine Ann.

A funeral Mass will take place on Monday in Dublin followed by burial in Bellaghy, Co Derry. Books of condolence are to be opened at Belfast City Hall and the Guildhall in Derry.

He was the eldest of nine children born into a farming family at Mossbawn near Bellaghy in Co Derry on 13 April 1939.

He was educated at the St Columb’s College Catholic boarding school in Derry. After school he studied at Queen’s University Belfast, before making his home in Dublin, with periods of teaching in the United States.

His poetry first came to public attention in the mid-1960s with his first major collection, ‘Death Of A Naturalist’, published in 1966.

The writer was awarded numerous prizes over the years culminating in the Nobel Prize in Literature in 1995. He also held professorships at Harvard and Oxford universities.