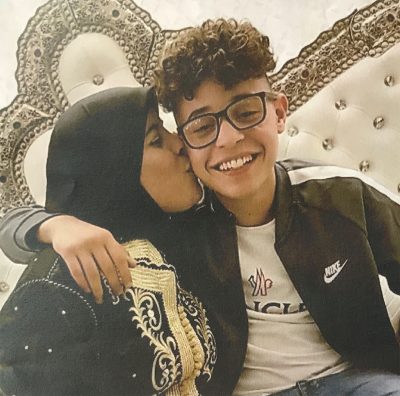 Azzam Raguragui, who was killed in Dublin on 11 May, pictured here with his mother.

The Archbishop of Dublin has described knife violence among young people was “a truly disastrous blind alley”, following the fatal stabbing of a teenager in Dublin last week.

Eighteen-year-old Azzam Raguragui was walking home from Friday prayers at his local mosque when he was stabbed to death in an attack in Finsbury Park, Dundrum on 11th May. Azzam was buried in Newcastle Cemetery last Friday, with hundreds of people attending his funeral service at Clonskeagh Mosque.

In his homily at Saturday night’s Vigil Mass in St Mary’s Church, Archbishop Diarmuid Martin said he was “shocked and saddened” by Azzam’s death.

“Being a Christian is not simply about rules and norms but about mirroring in the way we live that same self-giving love of Jesus Christ. Jesus tell us that his commandment of love is new. It is new because it is a call to live a more radical love, a love without human conditioning.

“Love conquers. It helps us to understand all the commandments. It reminds is that violence and deceitfulness are blind alleys that lead us only to greater hatred and violence and to lives that are ruined.

“Once again, I am shocked and saddened to see further incidents of senseless stabbings and knife crimes – especially among young people – in our city and in our country and in other countries.

“They take away an innocent life, they shatter a future full of hope, and they destroy the tranquillity of families. The lives of young perpetrators and their families are also ruined. Knife violence among young people is truly a disastrous blind alley.”

Last month in London, the Cardinal Archbishop of Westminster, Vin Nichols, took part in an evangelical rally against knife crime in Trafalgar Square.