Home > News > Too many young lives lost to depression: Archbishop

Too many young lives lost to depression: Archbishop 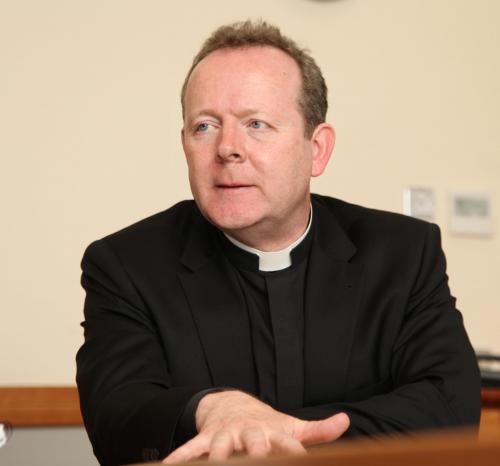 Too many young lives are being lost to depression and suicide, Archbishop Eamon Martin of Armagh has warned as he described the “prevalence of depression” among Ireland’s young people as “the most saddening feature of recent years.”

Speaking at the Annual Foundation Lecture of the Edmund Rice Schools Trustees in Belfast on Thursday evening, Archbishop Martin warned of a “creeping despair and emptiness” which had resulted in the loss of too many of young people through suicide.

Recalling WYD2013 in Brazil last July, he said two and half miles of Rio’s Copacabana beach had been crammed with three million young Catholics from all over the world, including Ireland.

Pope Francis left the young people in no doubt that they have an important role to play in the New Evangelisation.

“’The Lord needs you for His Church’, he told them. Unapologetically, he called them to be missionaries. ‘Be active members of the Church’, he said, ‘go on the offensive… build a better world of justice, of love, of peace, of fraternity, of solidarity’. ‘Don’t leave it to others’, he said.  ‘Don’t be observers of life’. ‘Get involved’. ‘Be protagonists of change’.”

The Coadjutor Archbishop of Armagh told those attending the lecture in St Mary’s University College that teachers and parents are struggling to compete with a lot of contradictory messages being hurled at young people by contemporary culture.

These include the cult of celebrity, binge drinking, drugs and pornography, he said.

The Archbishop, who is due to succeed Cardinal Sean Brady in August, also noted that the digital communications revolution had ironically resulted in a “breakdown in real and meaningful communication and friendships”.

Recalling his visit last Monday evening to his alma mater, St Columb’s College in Derry, where he spoke to several hundred senior pupils, he said he couldn’t help thinking back 35 years to when he was a student there.

“It is difficult to comprehend the magnitude of the changes that have taken place since then in education, the Church and society. The world is now a very different place.”

Those years had seen a steep decline in weekly practice among Catholics in Ireland, and like other parts of Western Europe, there had been a “certain loss of the ‘sense of the sacred’, increasing individualism and disengagement from community, and a tendency towards ethical relativism.”

The gradual drift of people away from Mass and the sacraments meant that increasingly people live their lives with little or no reference to belief or trust in God, he observed.

“A considerable number of baptised Catholics in Ireland are in need of a ‘new evangelisation’,” he said as he acknowledged that “the dark cloud of abuse, with all its shame and scandal,” had contributed to this.

The country’s Catholic schools, nevertheless, remained a valuable resource and were distinctive not only as centres of excellence and learning, but as places of faith, the Derry-born prelate said.

Referring to Pope Francis’ challenge to Catholic education, Archbishop Martin suggested three particular ways by which Catholic schools might respond to the challenge:

a. Instil confidence in pupils and teachers to be public witnesses for our faith.

b. Let God’s presence in his Word and the Eucharist transform our schools from within.

c. Reach out to the poor and tackle inequality.

If we wish to become witnesses for Christ today, we have to be able to draw upon both reason and faith in order to express our vision of the dignity and vocation of the human person, linked to the common good, he explained.

He also urged the Catholic education system to play its part in providing a progressive catechesis, “one which gradually and systematically helps pupils and teachers to grasp and present the essential content of our rich Catholic tradition and doctrine.”

Dr Martin said all Catholic schools, with the help of their diocesan advisor, might “usefully examine their ethos and curriculum in order to evaluate the contribution they are making to pupils’ knowledge and understanding of salvation history and of the four so-called ‘pillars’ of the Catechism of the Catholic Church.”

These he explained were 1) What we believe (the creed); 2) how we celebrate (liturgy and the sacraments); 3) how we live (Christian morality); 4) how we pray (Christian prayer).

Referring to the influences on young people, not least the digital media revolution, he said young people are often left without moral reference points and are easily swayed by ethical relativism, or by a comfortable ‘spirituality without challenge’.

“Sadly, as one young R.E. teacher told me recently: more young people are tempted towards a kind of ‘nihilism’, viewing life as basically meaningless.”

He continued, “Our Catholic schools have a vital role to play in developing a ‘creative apologetics’ (EG 132) which will help our young people to present and explain to their world a ‘consistent ethic of life’, and, as the first letter of Peter puts it: “a reason for the hope that is within us” (1Pet 3:15).”

“We must aim to send our pupils out ‘in the service of love’, emboldened with the Gospel of Joy, to change the world. We must help and encourage them to say a resounding ‘Yes’ to a culture of Life and ‘No’ to the creeping culture of death and destruction.”

He suggested that development education and Catholic social teaching ought to be a compulsory part of the curriculum in all Catholic schools as young people need to be educated about solidarity, fair distribution of the world’s goods, and about the impact of poverty on the dignity of the human person.

The Archbishop also called for an examination of the inequalities in the educational system to address the “widening gap between the highest and lowest achievers” and because too many young people are leaving school without “meaningful qualifications or opportunities.”