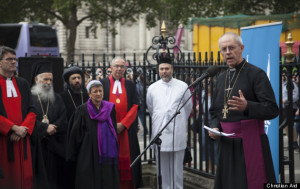 The Archbishop of Canterbury has condemned the brutality and persecution of Christians and other religious minorities in Iraq by IS.

Speaking outside Lambeth Palace after meeting 20 leaders of Middle Eastern Churches in the UK, he told the Guardian, “There has not been treatment of Christians in [the Middle East] in this manner since the invasion of Genghis Khan.”

Archbishop Welby said it had taken the West some time to realise how serious the situation was.

“It took the barbarism of jihadist militants to wake us up,” he told the Guardian. “I think we find it hard to believe such horrors can happen.”

He warned that minority faiths were being “wiped out” in areas controlled by the Islamic State.

“We are seeing an extreme religious ideology that knows no limits in its persecution of those who are culturally or religiously different. Those who promote this intolerance must be challenged and the perpetrators of violence held to account without impunity.”

“The suffering of those who bear the brunt of its terror requires us to act and bear witness to their plight, whatever ethnic group or religious minority they come from.”

“We must provide relief and safety for those displaced and in fear of their lives, in consultation with our partners in the region. We must also bring pressure to bear on those who can provide security to those affected.”

He warned that the Middle East as the birthplace of Christianity, was in danger of losing an irreplaceable part of its identity, heritage, and culture.

After the Lambeth meeting, the Archbishop of Canterbury took part in a vigil outside Westminster Abbey where he joined Christian, Jewish and Muslim religious leaders for an inter-faith vigil to “stand together” in support of all minorities suffering in Iraq.

The religious leader held up a banner with parliamentarians like Baroness Sayeeda Warsi declaring #WeAreAllHuman.

The vigil was co-ordinated by World Jewish Relief, Islamic Relief and Christian Aid.

Speaking after the vigil to Channel4, the Archbishop of Canterbury criticised the lack of a global strategy to deal with the “obscene simplicity” of IS ideology and its brutality.

“We can’t just take one place and then think we’ve dealt with it – it’s a Hydra with many heads.”