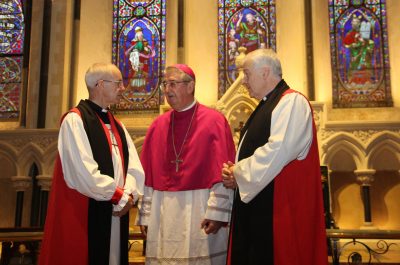 The leader of the Anglican Communion worldwide, Archbishop Justin Welby of Canterbury has said one of the “most special moments” of his visit to Ireland was meeting Archbishop Diarmuid Martin of Dublin.

In his sermon for the National Service of Commemoration for the 150th anniversary of the Disestablishment of the Church of Ireland, Archbishop Welby paid a warm tribute to Dr Martin.

He told the congregation at St Patrick’s Cathedral in Dublin, which included Minister Heather Humphreys on behalf of the Government, “Today, one of the most special moments, if I may say so, was to meet Archbishop Diarmuid Martin and to find him not just a wonderful man of God whose courage and leadership is known well beyond these shores, but a friend of Archbishop Michael [Jackson] and to see in that friendship the true sign of the Irish church.”

Saturday’s service officially launched the Church of Ireland’s National Programme to mark the 150th anniversary of its Disestablishment, which was enabled by the Irish Church Act 1869. Up until then, the Church had previously been united with the Church of England since the Act of Union 1800.

In his sermon, the Archbishop of Canterbury said that the Church of Ireland “has always been and continues to be a profound gift, not only to Ireland, but to the church universal including the wider Anglican Communion”.

“It is a bridge church – it bridges the two parts of this island, it has made a wonderful bridge with the Methodists, it has bridged across the gaps and divides in the Anglican Communion. It is a church of reconciliation and courage. Its history is one of regeneration, of resilience and it has led the way in many respects including the ordination of women.”

Referring to the potential impact of Brexit on the Church of Ireland, Dr Welby noted, “It is a church for which the border really does not exist. As no border exists in the mind of God.” 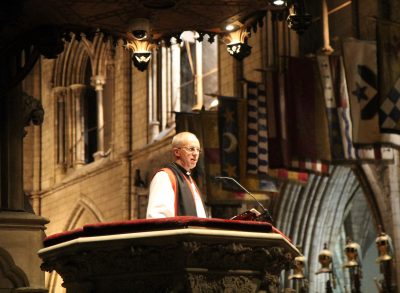 Archbishop Justin Welby was installed as the 105th Archbishop of Canterbury and Primate of All England on 21st March 2013. Photo: Lynn Glanville.

He acknowledged that today the Church of Ireland is “challenged to be the prophetic voice of God at a time when the side effects of Brexit will produce unforeseeable consequences.”

Referring to the reading from Jeremiah, Archbishop Welby commented, “We cannot avoid the reality of the context in which we live – but we can live in it as those who are called to follow a different path – one not of competition and exclusion but of love and hope.”

He stressed that everyone is accountable to God and all the more so if they are in positions of power and influence.

Speaking after the ceremony to CatholicIreland.net, Archbishop Michael Jackson, Church of Ireland Archbishop of Dublin and Glendalough said he found Archbishop Welby’s comments about the church being a place that is open and a safe place for everybody important.

Of the Archbishop of Canterbury’s words about the Church of Ireland Dr Jackson said, “We derive tremendous encouragement from somebody in a significant position of leadership who observes what we do from outside and then comes and as it were gives us more encouragement to continue that.”

“The other striking thing that he said was about a church across and beyond borders. He set that very much in the context of that being what he sees the Kingdom of God being like. But in Ireland where disestablishment predates the jurisdictional distinction into two political jurisdictions, that’s an important thing for us to hear. And whatever happens in relation to Brexit in the UK affects us here in Ireland as well and we will want to play our part to prevent as it were a closed mind – even if crossing the border physically becomes more complex.” 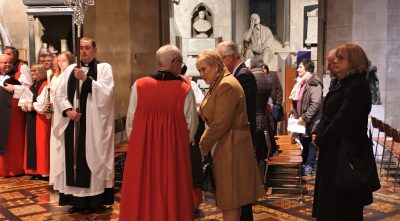 Asked about the 150th anniversary of Disestablishment, Archbishop Jackson said it was summed up in the “strapline that we took from the documents of 1869 – ‘Free to Shape our Future’.”

Minister for Business, Enterprise and Innovation, Heather Humphreys told Catholicireland.net that she felt that the relationship between all of the churches “is much better than it was say in the 70s or further back.”

“I think that is important. Here we have Archbishop Martin, Archbishop Jackson and the Archbishop of Canterbury. We are all here and there is only one God at the end of the day. I think that it is incumbent on us all to work together as Christians.”

She also highlighted that for the main Churches on the island of Ireland, there is no border.

“The Church of Ireland, the Presbyterian Church and the Catholic Church are all churches for the whole of the island of Ireland and certainly there are no borders. I am part of the diocese of Clogher which stretches right across into Northern Ireland. The Church sees no borders.”