Home > News > Pope and Archbishop of Canterbury meet in Rome

Pope and Archbishop of Canterbury meet in Rome 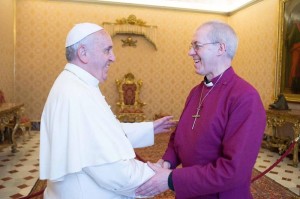 Pope Francis has pledged to continue his joint efforts with the Archbishop of Canterbury to combat human trafficking which he described as a “deplorable trade”.

At a meeting on Monday in the Vatican between the two church leaders both spoke about this “intolerable crime”.

Recalling their meeting last year, Pope Francis said in his address, “At our first meeting, Your Grace and I discussed our shared concerns and our pain before a number of grave evils afflicting our human family.”

“In particular, we shared our horror in the face of the scourge of human trafficking and forms of modern-day slavery. I thank you for the leadership you have shown in opposing these intolerable crimes against human dignity,” he told Archbishop Welby.

The Pope continued, “In attempting to respond to this urgent need, notable collaborative efforts have been initiated on the ecumenical level and in cooperation with civil authorities and international organisations.”

“Many charitable initiatives have been undertaken by our communities, and they are operating with generosity and courage in various parts of the world. I think in particular of the action network against the trafficking in women set up by a number of women’s religious institutes.”

“Let us persevere in our commitment to combat new forms of enslavement, in the hope that we can help provide relief to victims and oppose this deplorable trade. I thank God that, as disciples sent to heal a wounded world, we stand together, with perseverance and determination, in opposing this grave evil.”

The Archbishop of Canterbury said that the crime of human trafficking must be tackled with urgency.

In his address, Archbishop Welby said, “I am grateful for the progress that has been made through the generous support of many, to draw to the attention of the world to the evils of Modern Slavery and Human trafficking.”

“The Global Freedom Network can achieve much practically to dismantle what you have so often rightly said is a grave crime against humanity. It is a crime that we all need to overcome as a matter of urgency, as a matter of human dignity, freedom and wholeness of life. May God give us the resolve and cooperation we need together.”

Elsewhere during the meeting, Pope Francis told the Archbishop of Canterbury that unity among the Christian churches was an achievable goal.

“The goal of full unity may seem distant, but it still remains the aim towards which we must guide every step of the ecumenical journey that we are taking together”, the Pope said.

He continued, “We cannot pretend that our division is not a scandal, an obstacle to the proclamation of the Gospel of salvation of the world.”

“I find a source of encouragement in the plea of the Second Vatican Council’s Decree on Ecumenism that we should advance in our relationship and cooperation by placing no obstacle to the ways of divine providence and by not prejudicing future promptings of the Holy Spirit (cf. Unitatis Redintegratio, 24).”

“Our progress towards full communion will not be the fruit of human actions alone, but a free gift of God. The Holy Spirit gives us the strength not to grow disheartened and he invites us to trust fully in the power of his works.”

On Sunday, the Archbishop of Canterbury met leaders and supporters of the Global Freedom Network, an ecumenical and interfaith initiative involving Catholic, Anglican and Muslim followers that was launched in March.