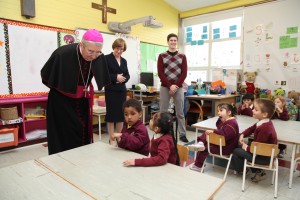 One of the most important enterprises in any society is the education of its children and educational policy must always  prioritise the poor, Archbishop Diarmuid Martin of Dublin has said.

Speaking at a Mass to mark the opening of the school year in Clonliffe College, the Archbishop called for the needs of the members of the Travelling Community to be addressed more effectively as they persistently remain among the most disadvantaged educationally in Irish society.

Stressing that quality education is a fundamental right of all, Archbishop Martin warned that failure to invest in fostering the educational opportunity of the disadvantaged is “economical nonsense” as it ends up requiring greater investment at a later stage when it may be too late and less effective.

He said catholic educational institutions – especially the most prestigious – must have find ways to assist the disadvantaged. “Exclusivism should never be the dominant tone of any Catholic school,” he said.

Of the place of catholic schools in Irish education, Archbishop Martin said they have and will continue to “play a vital role” in the future where there would be a different overall cultural climate which respects the rights of all parents to choose a school which represents their values.

“The demand for catholic schools is strong. The demand for other forms of patronage is growing. The process of diversification is still too slow,” the Archbishop, who is patron of over 80 percent of catholic primary schools in Dublin said.

Acknowledging that there are those who “would wish to play down the role of catholic schools because of the evolving cultural variety that now exists in Ireland”, he noted that the majority of immigrants in Ireland are “intensely interested in schools with a religious ethos”.

On the other hand, he said there were those who rightly note the pioneering role that catholic schools have played in the integration of immigrants, but who as a result give the impression that catholic patronage should retain an over-dominant role and fail to recognise the right of parents who wish to have access to schools with a multi-denominational or on denominational ethos.

There are others who feel that a plurality of patronage is intrinsically divisive and that there should be only one school system equally accessible to all.

“Experience shows, however, that like it or not parents will do anything to send their child to a school they regard as a good school.”

Ireland, Archbishop Martin commented, needs to overcome the “intolerance of religion which can be found at times in an intransigent secularism which still feels that nothing can come “from that place”, from faith in Jesus Christ.”

Underlining that we are living in an era of change, he told the faithful that this is “no time for believers to sit and bemoan or to be side-lined into the irrelevant. Believers must regain confidence and courage to face new things in new ways”.

He added, “It is time for tolerance and respect for diversities.”

Admitting that the debate on patronage can be polarised and ideologically polarise society, Archbishop Martin said a pluralist society has every day to learn what being pluralist means and how to communicate while maintaining the language of its dear felt values.

“In the educational sphere pluralism means also ensuring that ideologies are laid to the side for the moment while a sense of common purpose emerges to respond to the urgent needs of the poorest and most disadvantaged.”