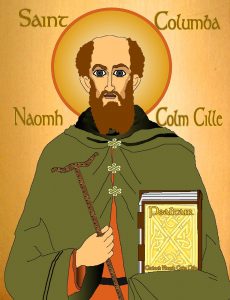 Archaeologists in Scotland believe they have identified the remains of the cell or scriptorium of one of Ireland’s most revered saints – St Colmcille (also known as St Columba) – on the island of Iona.

Carbon dating has led to the breakthrough, which proves samples of hazel charcoal, unearthed in an excavation of a wattle and timber structure on Iona 60 years ago, are from the exact period Columba lived in the Inner Hebridean monastery. The structure is believed to be the monk’s “cell”, where he prayed and studied in isolation. Results show the hut dated back to between 540 and 650, and Columba died in 597.

The samples were recovered in 1957 by archaeologist Professor Charles Thomas, but with radio carbon dating only in its infancy, they were not tested and instead kept in matchboxes in his garage in Cornwall. Although the excavators of the hut argued it was likely Columba’s cell, the lack of dating technology led many archaeologists to dismiss the findings as speculation and scientifically unproven.

Speaking to the Daily Telegraph, he said “Thomas always believed he and his team had uncovered Columba’s original wooden hut but they could never prove it because the technology wasn’t there. So, for us, 60 years later, to be able to send the original samples off to the radiocarbon dating labs and have them come back showing, within the margin of error, as something which may have been built in the lifetime of St Columba, is very exciting. This is as close as any archaeologist has come to excavating a structure built during the time of St Columba and it is a great vindication of the archaeological instincts of Thomas and his team.”

St Colmcille was an Irish abbot and missionary credited with spreading Christianity in what is today Scotland at the start of the Hiberno–Scottish mission. He founded the important abbey on Iona, which became a dominant religious and political institution in the region for centuries. He is the patron saint of Derry.